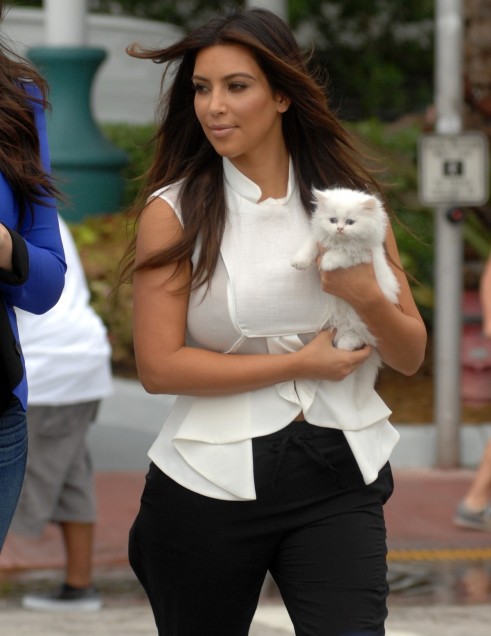 This is so sad! We know that Kim Kardashian has no animals causing others pain–she is notorious for wearing the cruel fur that so many A-list celebs have already nixed form their wardrobes, and now the D-lister has the death of a 4-month old kitten on her hands. The fluffy white Persian cat was a gift from boyfriend Kanye West, and was named after the rapper’s hit song. But giving an animal isn’t like giving a clutch or pair of Louboutins–all animals need love, a stable environment, and proper veterinary care. Apparently, those are the three things in the world reality star Kim can’t afford.

PETA was in uproar to see the constantly tweeted photos showing Mercy being held like a wallet, with a pained expression on her tiny face. On Saturday Kim tweeted the news.

“When I first got Mercy, I had never lived with a cat before and so I had no idea that I was allergic. I thought that it might pass, but after a few weeks I decided to go visit two separate allergists, one of whom said my allergies wouldn’t get any better unless I started taking injections. I had fallen SO in love with Mercy that I wanted to try everything I could to keep her, but I didn’t think it was safe to resort to injections, and it wasn’t fair on Mercy, because I couldn’t play with her or give her as much attention as I wanted to. Mercy deserved a mom who could really give her the time and affection she deserved. I knew that Sydney, Khloe’s assistant, who had recently lost a cat she had loved and cared for for 17 years, would be the perfect mom for Mercy and Sydney was so excited to have Mercy as her own!

Sydney gave Mercy a loving home, but after a couple of weeks Mercy got really sick and Sydney had to rush her to the vet. They discovered she had a stomach problem that we weren’t aware of. Her stomach had filled with fluid and the doctor said she had a rare stomach cancer and that there was nothing we could do for her. Poor little Mercy died the very next day. It broke not only my heart that little Mercy died at only four months old, but Sydney’s too.

Mercy was a gentle and loving kitten and we are all going to miss her so much. Thanks to Sydney for making Mercy’s short life one filled with love. RIP Mercy Xo”

But you have to take it with a grain of salt–immediately after she tweeted how to get a classic nude lip look, and blogged about window displays in a department store. It doesn’t sound much like any of the mourning I’ve heard of. I hope that Kim isn’t lying about Sydney providing a loving home, and we understand that sometimes animals really do get sick. But how can you blame this on genetics–if it is cancer, and the kitten is getting proper vaccinations and spaying done, how could a vet miss that? We feel so awful for the poor little kitty, and want to remind you this holiday that pets are a huge responsibility–thing long and hard before adopting (never buy!).