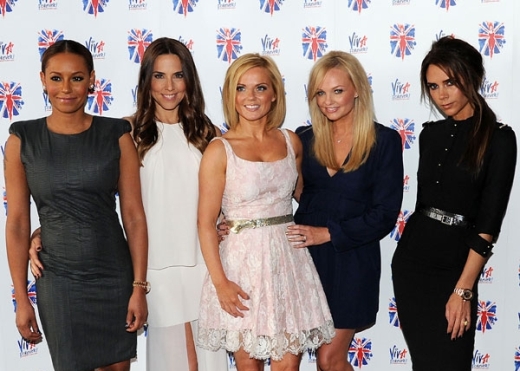 Mel B has said she has had constant arguments with Victoria Beckham and even got into physical fights with Melanie C. The former Spice Girls stars are discussing their past as part of a promotion for their new musical, Spice Girls: Viva Forever, opening on Tuesday, and while Mel C has already said she and some of the other girls have had bust ups in recent years, Melanie Brown went a little further saying she even got into fights.

Mel, who now resides in Australia, explained to the Sunday Mirror:

“I’ve had punch-ups with Mel C in the past. But we have unconditional love for each other underneath it all. Obviously there’s been stories saying some of us hate each other and there are fall-outs. But we’re like sisters. You know, we go through ups and downs and sometimes we might be pissed off, but at the end of the day we’re there for each other.”

Earlier this year, all five girls got back together for the launch of Viva Forever’s first premiere, and fans quickly criticized the the tension between Mel and Victoria, Beckham refused to smile throughout the interviews while the rest of the girls were acting a little silly and laughing with each other. It was reported that Victoria felt extremely uncomfortable around her former girl group, especially with Mel.

Mel also addressed these rumors in the interview, she said:

“We might not speak for a week or so but then we get back on Skype and sort our s**t out. It’s all nice right now. But the five of us definitely have been through it over the years. We were the book­ends, weren’t we? Victoria was one end and I was at the other. You know what? Me and ­Victoria are fine now,” she told the paper. “It’s like any relationship with her and me. We fight, we argue, we make up… it’s always been like that. It’s been like that with all five of us over the years.”