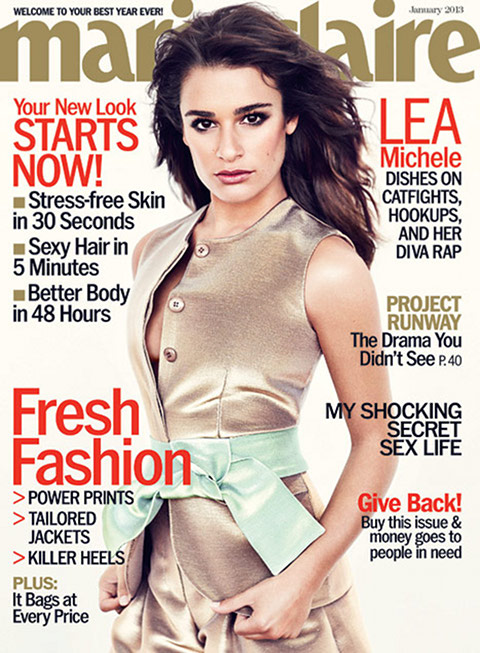 Lea Michele may play a timid singer on the hit show Glee, but her first gig on Broadway was as a topless teen who dies during a back-alley abortion. In the January volume of Marie Claire, Lea gabs about the transition she had to make when starting in Hollywood.

“For a while they were out and about, showing off on Broadway every night, then they came to L.A. and were like, ‘No one else looks like me here!’ They were nervous to make their appearance but feel they’ve earned their place. So they asked if they could come out, and I was like, ‘All right, you guys.’ They definitely rose to the occasion, so I’m going to continue to give them more opportunities.”

The vegan singer/actress doesn’t mind giving it all up for her craft, but I guess it helps when your on-screen boyfriend is your real life boyfriend, Corey Monteith. “No one knows what it’s been like to go through this more than he does. Feeling like you have that net underneath you allows you to jump higher and go farther. He makes me feel like I can do anything. For the first time in my life, I feel really, really settled and happy. I feel like the luckiest girl in the world.”

They’ve barely been dating a year, but I guess when love strikes, it strikes hard! We are obsessed with Lea’s storyline on Glee right now–Rachel is finding her way in New York City with BFF Kurt. And even though Lea doesn’t mind letting the ladies loose, she still knows how to stay classy. You won’t find her in the back seat of a police car! What do you think of Lea’s breast philosophy? Weird or refreshingly honest?