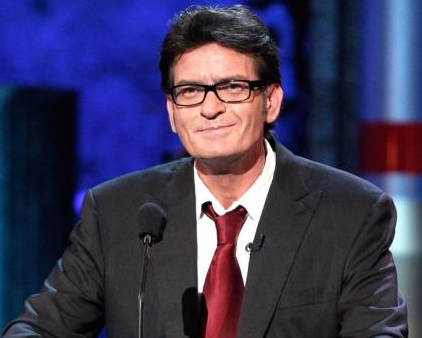 Is every thought I’ve ever thought about Charlie Sheen inherantly flawed? Beneath the winning, tiger blood drinking, goddess plowing, crackhead is a true philanthropist! We previously mentioned that Charlie divided his profits from Scary Movie 5 and donated it to charity (and to Lindsay Lohan, to pay off her tax debt), but now he is going above and beyond! The highest paid actor in TV history was having a nice conversation with a Hermosa Beach police officer and learned that someone at the department had just learned their 10 year old daughter has chidlhood rhabdomyosarcoma, a cancer in muscle tissue that takes years of treatment.

Charlie sympathized and vowed to help. But instead of just disappearing and forgetting about it, the next day he mailed out a cool check for $75,000 to the police department fund for the girl! Imagine the surprise of the guy who checked the mail–a check that big, and a second from Charlie’s stunt double Eddie Braun, who donated $25,000. For those of you whose math skills are questionable, that’s $100,000 total!

Now, we’ve all had an opinion about Charlie at one point. Whether it was his actor or personal life, we’ve probably shaken our heads and asked, “what has to happen for a person to turn out that way?” Well, I take it back! I don’t know if he’s always been like this, or if it’s a side effect of the tiger blood, but whatever he’s doing is awesome. We love seeing true, anonymous philanthropy from our celeb counter parts. And think of that girl’s parents, to know that they won’t have to sell their home, take out loans, or do other drastic things to afford cancer treatment.

Charlie Sheen, wherever you are, we think you’re fabulous, and that you should absolutely keep it up!