Charlie Sheen Wants Lindsay Lohan To Thank Him After He Donates $100,000 To Her Growing Debts 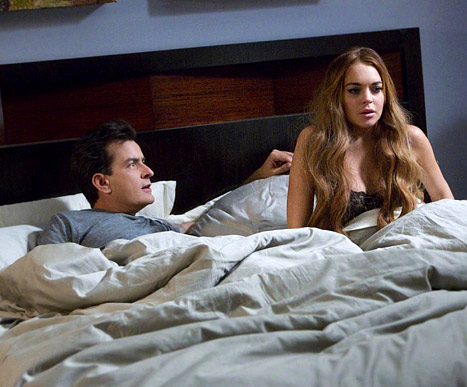 Charlie Sheen is still waiting for Lindsay Lohan to thank him for the $100,000 he donated to her so that she could pay off some of her unpaid bills. You may have heard, Lindsay has been having trouble to pay her rent at a home in Los Angeles while her mother Dina Lohan recently cashed in more than $60,000 from her daughter so she could keep her house in New Jersey as she also struggles financially. Obviously the entire family are having trouble paying their bills.

Sheen, who stars with Lindsay in Scary Movie 5 which the two filmed together two months ago, has said that though Lohan has not thanked him for giving him the huge sum, he’s aware that the actress needs serious help, but people need to lay off her business and give her time to deal with her own demons in her own time.

Sheen tells Entertainment Tonight: “I’m still waiting for a text to say, ‘Thank you’. Anything, you know? She just needs a little bit of time… People need to give her time to get her s**t together.”

Lohan recently said she feels bullied by how the media treats her, adding that if it was any other celebrity that was given this kind of bad publicity, they would not have been able to cope with it.

“Since I was a kid, I’ve loved being on camera,” she said. “Don’t misconstrue that: I didn’t strive to have flashbulbs at dinner or people who don’t know me calling TMZ. And 99% of the time, it’s not true.” Lohan added: “I feel bullied. I can’t think of any actor who has been subjected to such extreme publicity who hasn’t, like, committed suicide.”