Justin Bieber Gets Caught Checking Out Muscles In Miami 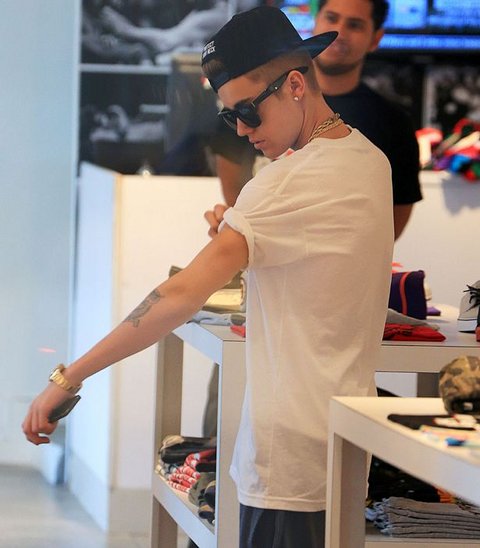 Justin Bieber is just bizarre. The bajillionaire pop star is a world class cheater, but still has the Disney Princess Selena Gomez. He’s loaded, but insists on wearing half-pants-half-diaper concoctions. He is a rich white kid who tries to act like he’s come from a hard life. (I guess he has, if you count being exploited by your pathetic mother hard!) His music sucks, his wardrobe sucks, his personal life, yeah it sucks too! And on top of that, he acts like a 25-year-old but is trapped in the body of a 14-year-old. But he may be hitting puberty, folks. That’s right–while shopping with his entourage in Miami, paparazzi caught the Biebs checking out his own tiny bicep.

For those of you unfamiliar with Justin’s ripped body, don’t fear. There’s still nothing to see. It’s that thing where you see yourself every day, so if a single eyebrow hair grows out of place you notice, but no one else does. Well, Justin’s muscle may have swelled a fraction of a centimeter, causing him extreme elation. I actually can’t say what I love most about his “casual” outfit. The hat balanced carefully on gelled hair is terrific, as are the legging pants tucked into elephant shoes. But I think the best part of his shopping trip is that he is surrounded by buff body guards. With cooler tattoos than him.

What do you think of Justin’s bizarre sense of style? Is the kid just a huge wannabe who isn’t big enough to fill his own shoes? Is this part of a style trend that I have completely missed out on? Let me know!