Miley Cyrus’ Dog Passes Away, Singer Takes To Twitter Following The Passing Of Her Pet 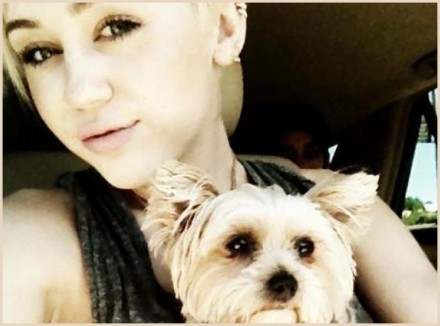 Miley Cyrus‘ pet dog has passed away, the singer has confirmed on Twitter. The singer, who had adopted the pet back in May supposedly faced several illness problems before he was handed over the Hollywood star. Cyrus has not explained how the dog, she had only had for several months, suddenly passed away – and neither do we think she’ll say – but considering that she used the words “passed away”, it must have been due to the dog’s bad condition.

“can’t think of one good reason to get out of bed today….” she wrote, adding: “for everyone asking… I have never been so hurt in my life. My heart has never been so broken….. Lila my sweet baby girl has passed away.”

Miley added that she was absolutely “broken”, saying: “Gonna go MIA for a bit. Need some healing time. Thank you to everyone who has sent love my way. I need it…. can’t sleep. I miss my baby girl….”

Talk-show host, Ellen Degeneres, offered the 20-year old some comfort following the news of the tragic death, writing on her Twitter page: “Thinking about my friend @MileyCyrus. I was so sorry to hear about her dog, Lila. She was a very sweet puppy.”

Miley is still left with a canine she recently bought, naming her Mary Jane, while she has also got a very close bond with her other two dogs, named Floyd and Ziggy. Meanwhile, The singer recently shared her plans on marriage, saying that she’s only planning one wedding, not three.