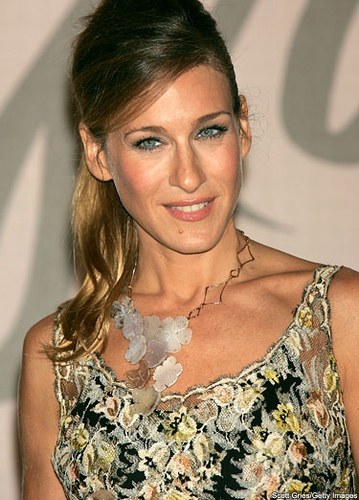 Sarah Jessica Parker, the sweet hearted Glee and Sex & the City star, pissed off quite a few air travelers on a trip from Oslo, Norway to NYC, USA today. Well, it wasn’t really SJP’s fault, but she was still involved in the little kerfuffle. The United Airlines flight was delayed by up to an hour while Norwegian police had to deal with a shoplifting incident involving one of SJP’s assistants.

According to a new TMZ report, “Sarah and her entourage were ready to board the plane when they were confronted by cops, who were called after an airport shop owner claimed one of Sarah’s minions pilfered a pair of expensive sunglasses.”

Surely that must be a mistake? Surely someone as high profile as SJP wouldn’t allow kleptomaniacs in her entourage? According to initial reports, police stopped the plane from taking off and forced the side swiping kleptomaniac to fork up $1 400 – it’s better than spending a few months in a Norwegian jail – and soon after the fine was paid, SJP and her tribe of dimwits were allowed to board the plane and leave the country – for good.

However, a new development in the story revealed that it was not SJP’s assistant who stole the expensive sunglasses; it was – you won’t guess this for a million dollars – an official working for the Nobel Peace Prize foundation. Hypocrisy served on lettuce, anyone? SJP was in town to cover the event, and the still anonymous person who stole the sunglasses was not on SJP’s payroll, but he was part of her entourage.

It most probably sucks really bad when you trust the Nobel Peace Prize people (who wouldn’t trust them? They’re all for peace!) and then get bamboozled by one of their own.

What do you think of this story? Do you think it’s weirdly coincidental? Let us know your thoughts in the comments below.

Renier132 posts0 comments
You might also likeMore from author
OK!