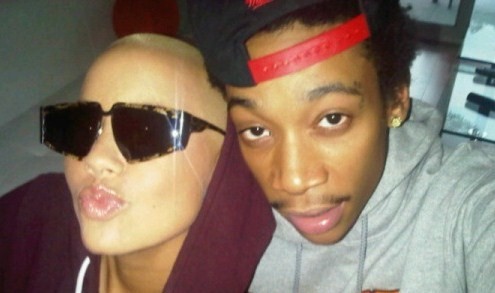 Wiz Khalifa has said that girlfriend, Amber Rose, suffered a miscarriage before her current pregnancy – which she announced at this year’s MTV Video Music Awards. The rapper had told Hot 107.9 about Rose’s first miscarriage earlier this year, which prompted them to stay quiet about Amber’s second pregnancy, because they didn’t want to go through that pain again in the media.

“Her first pregnancy was like right before [her current pregnancy], and it was unexpected,” Us Weekly quotes him as saying. “Right when we found out she was pregnant, she lost the baby. I was like, ‘F**k that, I want a baby’. And she got pregnant again – like right away.”

Khalifa, born in Pittsburgh, explained why he and Rose kept the pregnancy a secret for as long as they did. Wiz adds that every time he hears something positive about his soon-to-be first child, it inspires him to be a better father even more. He continues:

“Every time we go to the doctor, he tells us how healthy the baby is, how perfect her pregnancy has been, and literally has just inspired me to be the best dad,” he said. “I have this little ball of joy coming into the world, I gotta show right for him.”

Rose is expected to “pop” this months, Wiz revealed to Wendy Williams earlier this week.