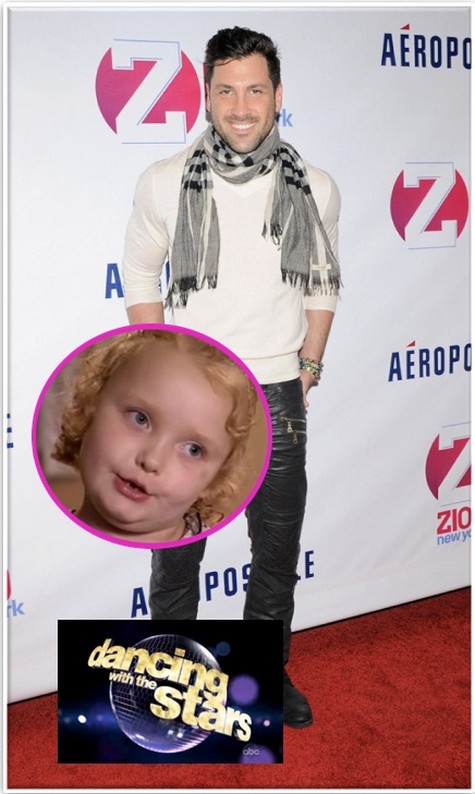 Although he is known for his hot ballroom moves, Maks Chmerkovskiy always feels free to speak his mind about pretty much anything that is asked of him. Recently his opponent on Dancing With The Stars, Karina Smirnoff had a really negative reaction when it was suggested that Honey Boo Boo or any of her family might be a good fit for the show. Maks was also asked about the possibility of Alana or Mama June trying out and according to In Touch Weekly, the heart throb was totally on board.

“If they’re passionate and like to work a lot! Whoever wants to do it and has a desire and passion and likes to work a lot without getting paid a lot for it.”

It’s easy to say that you wouldn’t mind big June Shannon as a partner now, but I bet if Max was paired with her he’d fly off the handle. I also don’t see Maks or any of the other ballroom pros having anything to worry about. I don’t see any one from Honey Boo Boo signing on to do DWTS even if the money was good.

There is one person in particular that Maks said he really hoped would sign up to do the show, The Bachelorette’s Emily Maynard. Apparently he is captured by Em’s beauty but hasn’t bothered to Google her. If he did that then a whole different world would open up for him besides thinking that she is the poor, twice jilted girl! I definitely can see Emily doing the show. She wants to continue filming something- anything that is reality based so DWTS Is an obvious choice. Do you think that Alana or June will strap on their dancing shoes and start training for Dancing With The Stars? Tell us your thoughts in the comments below!