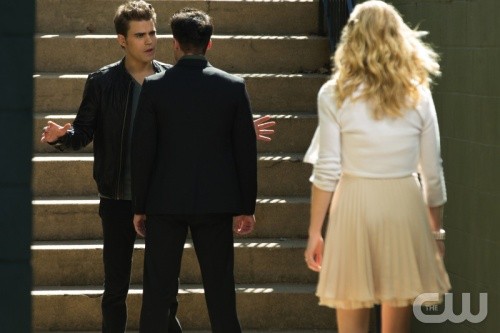 Tonight is the mid-season finale of The Vampire Diaries called “O Come, All Ye Faithful.”   On last week’s show we spent a lot of time between current time and flashbacks to 1942.  Damon and Stefan determined that Elena was sired to him and Damon told Stefan that this was not the first time.  It seems that in New Orleans in 1942 Damon was sired to a women called Charlotte.  Damon knew a witch at the time that may be able to break Elena’s sire bond.  When the boys find the witch’s granddaughter they find out to break the bond they need to sacrifice 12 innocents.  However, they soon find out that this was a lie and the only way to break the sire is for Damon to cast Elena aside and leave her.  Did you see last week’s premiere episode? We did and we recapped it here for you.

On tonight’s show a WINTER WONDERLAND IN MYSTIC FALLS – As a Winter Wonderland-themed party fills the streets of Mystic Falls, Stefan and Caroline find themselves at odds with Tyler over his plans for Klaus and his hybrids. When Caroline proposes a solution to their problem, Hayley (guest star Phoebe Tonkin) finds a dramatic way to make it clear that she is not on board. Later, Klaus makes a discovery that leads to chaos and violence. Meanwhile, Elena and Damon retreat to the Gilbert Lake House to help Jeremy conquer some dangerous inner demons with the help of Bonnie and Professor Shane (guest star David Alpay), who reveals a piece of ancient history that leaves them all speechless.

Come back to this spot and spend the evening with us enjoying the show! Make sure to refresh often to get the most current update!