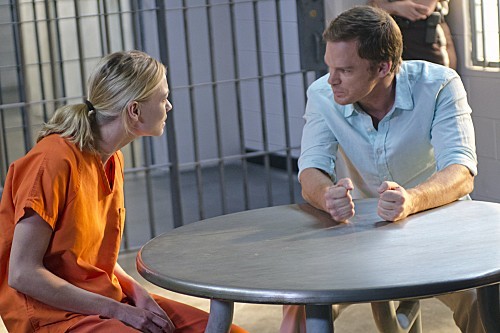 Dexter returns to Showtime tonight for the season finale of the 7th season.  On last week’s show it was Christmastime, and Debra learned it may be better to receive when she gets a tip from Hannah’s father, one that could have led to incriminating Dexter in a crime. Meanwhile, Dexter discovered that the man behind his mother’s death had been released from prison.  Hannah and Deb had a face off about who loved Dexter more. Deb said she’ll do anything to protect her brother from Hannah.  Did you see last week’s episode? We did and we recapped it for you here!

On tonight’s show La Guerta doesn’t have proof, but will that stop her from trying to bring Dexter in? Deb is seen telling Dexter that he needs to “fix it.” He says he will, he just doesn’t know how yet. It looks like, once again, Debra’s not going to sit back and let Dexter do it on his own. She goes to confront La Guerta and accuses her of trying to frame her brother, Dexter.  Captain La Guerta loses control and screams at Deb that Dexter’s the Bay Harbor Butcher, he has to be!

With LaGuerta closing in, will Dexter try to take her out? She doesn’t fit the code, but lately, who does? Harry’s in Dexter’s head (as always) encouraging him to run and telling him not to drag Debra down with him. Dexter seems determined to protect his sister at all costs. Harry reiterates to Dex that La Guerta “doesn’t even begin” to meet the code.  Dexter justifies what he is thinking of doing by telling Harry, it is “the only option.”

So be sure to tune in for our live coverage of Showtimes’s Dexter Season 7 Episode 10 — tonight at 9PM EST!