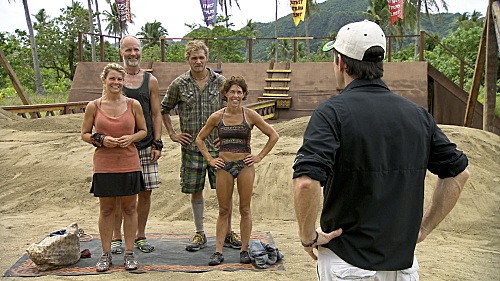 Tonight is the night!  It is the season 25 finale of Survivor!  On last week’s show the million-dollar prize and title of Sole Survivor was within reach for one of the five remaining castaways. Meanwhile, a few castaways made a final three deal while aboard a moving ship far from their fellow tribe-mates.

At tribal council Jeff asked Lisa what happened after Malcolm won immunity.   Lisa told Jeff that Abi started making her move and trying to save herself. Abi confirmed that she was on the chopping block. Jeff reminded everyone that Abi was universally detested and Abi told him she was the best.  If you missed last week’s episode we have a full and detailed recap for you here!

On tonight’s show the final four survivors scramble to secure their place at the final Tribal Council. Meanwhile, a crucial reward challenge allows castaways to compete for a highly coveted advantage.

We spoiled the show for you today, if you are one of those people who doesn’t like to be spoiled, don’t click over.  But, if you want to know who wins the show GO HERE!