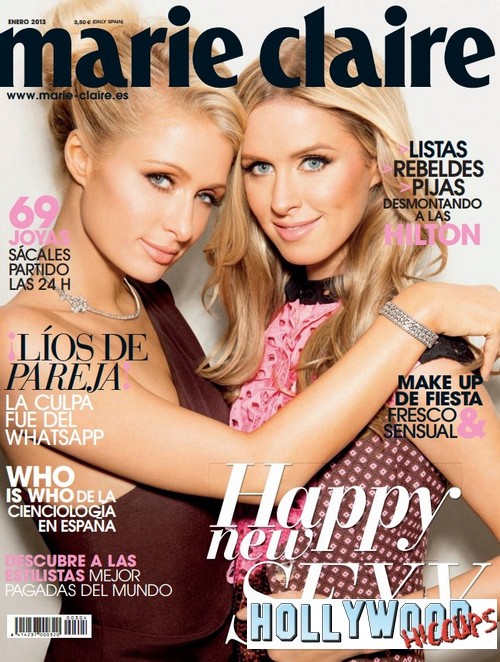 It looks like Paris and Nicky Hilton are kicking off 2013 on a high note!  The sisters both grace the cover of the Spanish version of Marie Claire, which is on newsstands now.  They were photographed by Daniel Gabbay and both Paris and Nicky look happy and healthy, stunning as usual.

December has already been a super busy month for the ladies Paris spent several days at the start of the month in India. She rocked the runway for Shane and Falguni Peacock during India Resort Fashion Week and then moved on to far more important things, visiting children in an orphanage. Christmas came early as Paris brought gifts for the kids and danced with them to their favorite tunes. She ping ponged from India to a relaxing stint in Miami, but was back in LA again just in time to play Santa for sick kids in a children’s hospital on Saturday.

Earlier this month Paris and Nicky made news together for adopting Demi Moore’s stray kitten on the spur of the moment. Moore was seen partying at Soho House in Miami with the kitten but then moved on to her next stop of the evening, leaving the fur ball behind. The sisters are known for their love and devotion to animals and they weren’t going to leave without the cat. They took “Soho” back to their suite at the Fountainbleau Hotel before flying it via private jet home to NYC. Isn’t it great to see celebs that aren’t so lost in having a good time that they neglect the needs of even a small, homeless animal?

Obviously Nicky and Paris remain as close as ever and all of their hopscotching across the world doesn’t keep them apart for very long!  Will you be grabbing the issue of Marie Claire that features them? Tell us in the comments below!