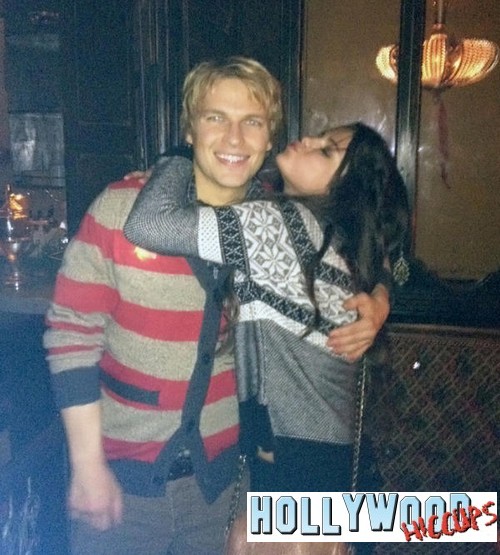 Uh-oh, Justin Bieber’s going to be mad. That is if he’s still actually dating Selena Gomez. You never can tell these days and a photo that has popped up on Twitter draws an even bigger question mark.  Super late Monday night, Ronan Farrow posted a photo of himself on Twitter, with Selena hanging off his neck, lips puckered, clearly that last second before planting a kiss on him. Ronan (son of Woody Harrelson) also tweeted never to challenge Selena to a dance off because you’ll lose.

No one seems to be too sure just how close Selena and Ronan actually are, but if you ask me he’d be a huge upgrade for the former Disney princess. He’s 24 and a college graduate. That’s right, perhaps Selena is becoming attracted to guys that are older than she is! Enough playing in the sand box with younger guys, it’s time to find a real man- at least that’s what I hope that she’s thinking. to wonder though, have her recent moves been intended to make Justin jealous? Is she really busting out and finding herself or is she strategically showing Biebs that she is hot and sought after?  I mean just last week she released the sexy video of her and her girls slinking around to Taylor Swift’s I Knew You Were Trouble which sure could send a message. Now getting touchy feely with another guy, it all makes me wonder. I hope if it’s aimed at Justin it’s intended to make him jealous of what he has lost, rather than be a ploy to win him back.

What are your thoughts on Selena’s photo with Ronan? Is there something up between them? Tell us your thoughts in the comments below!