The Kardashians Reveal Their New Christmas Holiday Photo – It’s Not All Bad! 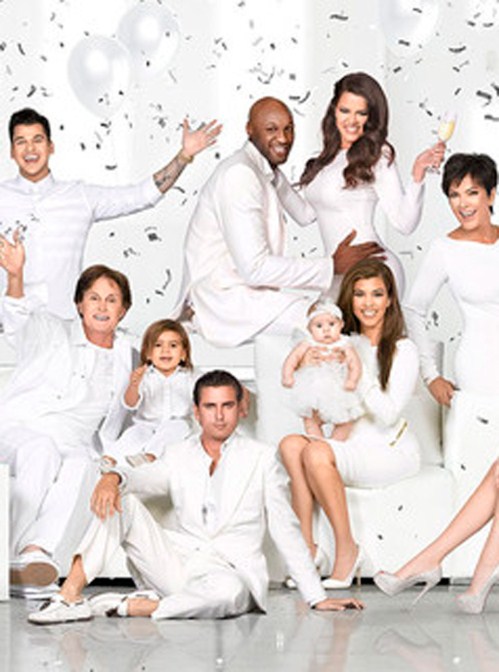 The Kardashians have an ongoing love affair with themselves. Seriously, these people would date mirrors. Once again, as is KarTrashian tradition, the family of dimwits finally unveiled their 2012 Christmas portrait on Tuesday. But wait! There’s more! This isn’t a Goth-themed, matching red gowns, or even a Kim/Khloe/Kourtney Santa hat extravaganza; it’s a family of fools made in sparkly, white hell!  The only person missing from the tribe is Kim’s soon-to-be husband, Kanye West, but the rest of them are there – happy and insane as ever!

Thankfully, the image isn’t a morose picture of gaunt Kardashians; instead, it’s celebratory-themed and shows the Kardashians gleefully relishing in golden confetti streamers and glasses of faux-champagne – just like when you rock up in hell and see people partying to Marilyn Manson music. There have been rumours that Kris and Bruce Jenner will split very soon, but if one takes a quick glance at this image – don’t look longer than ten seconds because your eyes might burn – you’ll see the matriarch and her minions as happy as ever. Famed blogger Perez Hilton recently suggested that Bruce doesn’t want to leave the family behind on Christmas and move out of the house, as not only would this be a PR disaster for Kris, but it will also ruin the family’s traditions and celebrations.

On a more somber note, Bruce used to be a Newtown, Connecticut resident and he also attended the high school in close proximity to Sandy Hook Elementary where the horrific and tragic school shooting took place last week Friday.  This personal connection will ensure that the family keeps their personal trials and tribulations at bay as long as possible.

What do you think? Do you think Kris and Bruce are going to break up soon? Do you like the Kardashians? Let us know your thoughts in the comments below.