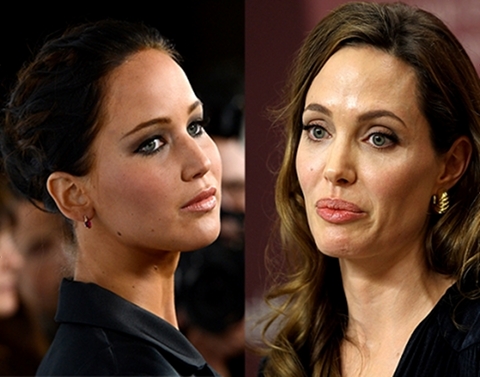 Angelina Jolie has found a new Jennifer to hate on–Hunger Games star Jennifer Lawrence. A source reported to National Enquirer that Angelina had her eye on the role of Tiffany, and actually worked really hard to get it! But the director couldn’t resist the youthful energy Jennifer brought to her audition tapes. “Angelina desperately wanted the fe­male lead in the movie ‘Silver Linings Playbook.” The source reported. “It was a prime role with great dialogue, and Angelina campaigned hard for it. But once the director saw Jennifer’s audition, it was no contest. Jennifer blew her out of the water, and Angie was enraged!”

Angelina has long been considered one of the most beautiful women of our age, is engaged to one of the most attractive and talented actors out there, has a beautiful family, the lead role in the upcoming epic movie Maleficent, and legs that go on for days. It’s pretty hard to believe that she feels so threatened by Jennifer, who is terrific, but has admitted to being fat by Hollywood standards. If anything, I think Jennifer is a threat to Angelina’s career because she’s, well, Angelina 2.0! She’s starring in the action packed Hunger Games trilogy and could be the younger model of Angelina that we’ve been waiting for!

The source also reported, “Angie was beside herself,” when she got the news. “She screeched, ‘What’s she got that I don’t have?’ The simple answer is youth. Angie’s getting older and the big parts are going to rising young stars like Jennifer.” Jennifer has gotten an SAG award and Golden Globe nomination for her performance. Angelina thought the movie set up the actress for the awards, and they should have been hers! Do you think this is just hot air from the National Enquirer, or could Angelina have some real self esteem problems going on right now?