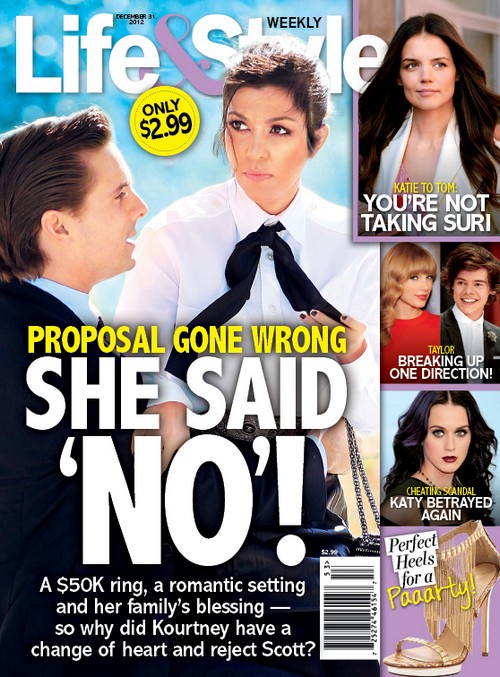 Kourtney Kardashian has finally come to her senses, she has refused Scott Disick‘s  marriage proposal.  In a glimmer of intelligence Kourney has decided that Scott is not the man to marry.  Maybe she should have thought of that before she had two children with him…. just saying….

Scott got down on his hands and knees with a huge $50K rock while the couple were filming Kourtney and Kim take Miami and Kourtney said NO.  She is so serious about not marrying Scott, that she would not allow the proposal to be filmed for her reality show.  A source revealed to Life & Style, “She didn’t allow for an engagement to be filmed.  They did not film a proposal, and it was because of Kourtney. She said, ‘No.’ She does not want to be engaged.”

This is the second time that Kourtney has refused Scott’s proposal, you would think he would take the hint.  Kourtney does not want to marry Scott right now, she thinks their relationship is less than perfect.  Wonder what makes her think that?  His partying, the other women, his drunk antics?  Everyone knows Scott is the biggest douche in La La land and it is about time Kourtney woke up and smelled the coffee.