PETA Is Furious At Lady Gaga For Wearing Fur, Says She’s Out Of Her Mind 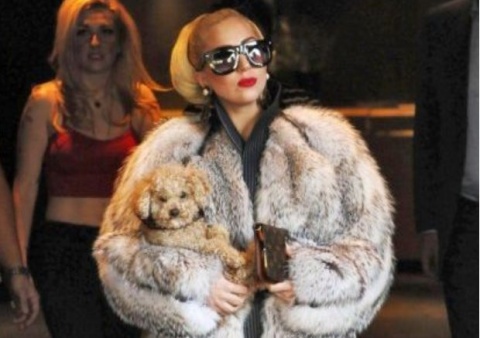 PETA is moving on from Kim Kardashian and are now targeting Lady Gaga, calling her “out of her mind” after purchasing a number of expensive fur coats from a boutique in Moscow last week. The singer flashed one of the new coats she bought as she left the Helen Yarmark shop, whilst holding a stuffed teddy bear in her right arm.

You will not believe how the much of monster of monster forked out for the Russian shop — according to reports, she spent $210,000 for the coat, along with several accessories. But then again, should we be shocked that Gaga did this. Clearly people are no longer paying attention to her, so the best way to cause more controversy and get attention is through doing something that is most likely going to get a lot of people annoyed.

PETA’s statement said the following: “Out of place, out of time, and possibly out of her mind: While the country focuses on rejecting violence and we are deep into the season of peace, giving, and kindness, Gaga is busy decking herself out in a coat made of at least 30 slaughtered animals’ skins.”

The singer is no stranger to being put on blast by PETA,- the organization was angry after seeing Gaga wear another outfit – made out of fur – at her ‘Born This Way Ball’ world tour in August. According to a recent poll, the singer, Lady Gaga, Kanye West, Nicole Richie, Jennifer Lopez and Lindsay Lohan are the most common celebrities to be seen wearing fur. But why do they do it?

If it is just to look good then it’s a lame excuse.