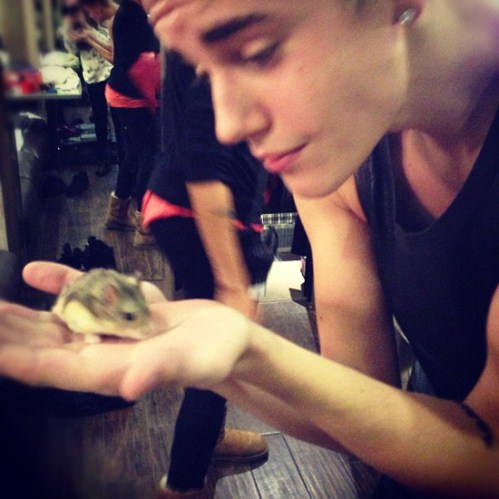 Giving away one’s pet hamster is like giving away one’s childhood. The little fluff balls with their baby hands and Kardashian feet deserve to be treated like a living being. However, Justin Bieber does not agree. The singing superstar gave away his pet hamster, PAC, to an obsessed fan earlier this month outside one of his concerts. The fan promised to love tiny PAC like she loves Bieber – all Toy Story up in that joint. Now, after animal rights organizations ripped the bottles of fake blood from their shelves, another animal association – aptly named the California Hamster Association (don’t laugh!) – have spoken out about the mistreatment of little PAC.

According to TMZ, CHA freaked out like a nun at an adult store when they learned of the great neglect little PAC had to endure. Their rep said, “[Hamsters] often succumb quickly to illness and death. The moment that hamster was handed off to a screaming girl in a harsh, frenzied environment was likely the moment it gazed at the short path to its doom.”

So, if you’re planning to hand your hamster to one of your drooling fans, you should follow CHA’s guidelines and instead take the animal to a rescue center in order for the experts “to hand it off to a responsible new owner in a safer manner.” Luckily for Bieber, paint cans won’t be thrown at him anytime soon – PAC is still alive and well taken care of by its new owner, 18-year-old Belieber, Tori.

What does this lesson teach us kids? Don’t treat your animals like dispensable fan memorabilia – they’re still living creatures. Oh, and Bieber, if you really, really loved PAC, you wouldn’t have given the little creature away to a crazy fan. Tsk-tsk Bieber… Tsk-tsk…