Katie Holmes to Spoil Suri Cruise This Christmas – $50,000 in Gifts 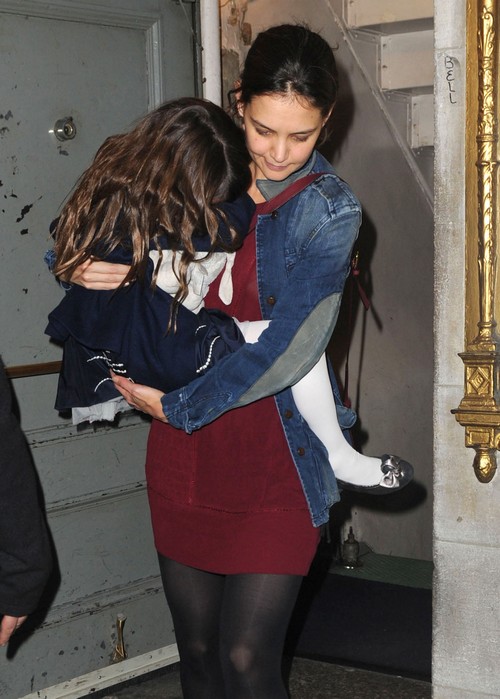 They say money can’t buy you love, but that doesn’t mean Katie Holmes isn’t going to try to win the best Christmas parent competition by splashing out on Suri Cruise for the holidays. Katie is rumored to have bought perhaps the world’s most extravagant playhouse for her little girl – a $24,000 Victorian model that’s nicer than most places Lindsay Lohan can afford these days.

Made by Sweet Retreat Kids, the over the top structure features running water and electricity and eight foot ceilings so even statuesque Katie can fit inside to play with her little girl. Options include garage, media room, working kitchen and custom landscaping.

Here’s my question – don’t they live in an upscale New York apartment? Will that monstrosity require a yard or is she going to have it wired and hooked into the plumbing in their fancy Manhattan place? I can’t imagine that she’s going to lay out all that cash and then plunk it down at Tom Cruise’s new upstate property…

Katie’s also ordered Suri her own car – a $9,700 Mercedes. Is she going to drive it down the sidewalks of Manhattan or just cruise the corridors of their ritzy apartment? Tom bought Suri a tiny race car two years ago for a whopping $30,000, so it’s not like Suri’s not accustomed to having a sweet ride of her own.

Also on Suri’s gift list from Mom Katie are Ralph Lauren designer duds and even a Chloe fur coat. I hope PETA doesn’t show up to Suri’s school with tiny buckets of red finger paint to thrown at her – you know how they are about fur!

Santa will also be bringing Suri an i-pad mini – that’s the most reasonable gift on her list. Also on Suri’s $130,000 Christmas wish list that In Touch Weekly published included a pony which Dad Tom is buying and housing at his upstate mansion. She also wants diamond earrings and ball gowns. I’m guessing when it comes to Suri, the earrings will be Tiffany rather than costume jewelry that most little girls get to play dress up. And the ball gowns are sure to be designer – I can’t imagine them putting anything ordinary on their little princess!

This year Tom gets Suri on Christmas day, so I’m betting the haul Katie’s bought for her little girl is to make sure she doesn’t forget how much her Mommy loves her even though she’ll be apart from her on the holiday. Wow! As a mom myself, I can’t imagine not having my son with me on Christmas – poor Katie. She’s there every day for breakfast, school drop off, homework, snacks and ballet lessons, but then can’t have here on Christmas morning. So sad.

And although Tom has plunked down $13.5 million for his upstate New York estate, he’ll be flying Suri to LA for Christmas and spending it with all three of his children at his LA mansion. Wow. Maybe they should have skipped the two sports cars and just bought Suri her own Suri-sized private plane. Seems like she’ll need it being shuttled cross-country between her parents.

I hope Katie has fun plans to keep her mind off her darling daughter being all the way across the country for Christmas. Maybe Tom will also remember that dropping a wad of cash on gifts for his daughter won’t make up for the months he goes without seeing her – it’s not like he needs to work that much…