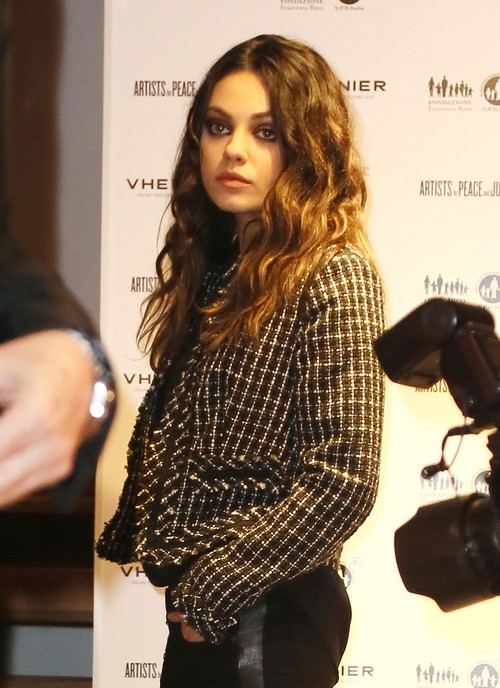 In news of the WTF, Mila Kunis was the subject of a Facebook rant by Ukrainian ultra-right politician Igor Miroshnichenko of the Svoboda Party. Kunis has always said she was Ukrainian and moved to the US with her parents when she was just seven. But now the dark haired beauty and current love of Ashton Kutcher has been attacked on the social media site out of nowhere by the Ukrainian politician.

Miroshnichenko wrote that Kunis was “not Ukrainian but a Jewess.” That’s the English translation – but the word he used that has been translated as “Jewess” was “zhydovka.” How to tell you the equivalent… Remember when Draco Malfoy called Hermione a mudblood? It’s something like this. Or maybe it’s better understood as the Ukrainian version of the n-word.

What he said was ugly. He wasn’t simply drawing attention to Kunis’ Jewish heritage, he was name-calling. Perhaps he didn’t enjoy his dubbed DVD of Ted? Or perhaps he’s a fan of Demi Moore’s – either way, what he did was unprovoked and hurtful.

The Ukrainian Justice Ministry said his usage of the word was “legal” because it’s in their official language dictionary. What the what? How many inappropriate words that you should never call anyone are recorded in our dictionaries? That’s a terrible defense of this hate speech.

But Eduard Dolinsky, director of the Ukrainian Jewish Committee says, “The last time this term was used in any official way was during the Nazi occupation, when the Jews or ‘Zhyds’ of Kiev were ordered to convene in preparation for their mass murder at Babi Yar.” I think that means “those are fighting words.”

The Svoboda party was first elected into the Ukrainian parliament just two months ago and carried 12% of the national vote. They don’t accept atheists into their party, former Communists, homosexuals or Jewish persons. These ultra-rights make our ultra-rights seem warm and fuzzy by comparison…

I hope Mila could care less about this random attack – she’s gorgeous, rich, has Ashton eating out of the palm of her hand and a successful movie and TV career. What I really hope is that Seth Macfarlane skewers this prejudiced windbag on Family Guy – that would be fun!