Taylor Swift and Harry Styles Hook Up and Heat Up: Sleepovers, Expensive Gifts, and True Love! 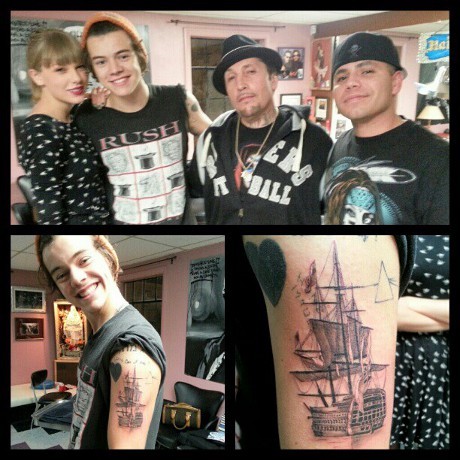 What is it with Taylor Swift and her younger men? The 23 year old has been seeing One Direction’s Harry Styles for a couple of months now and this is a rekindle from a brief Spring fling, but now it seems that things are really heating up. Harry’s in LA, he’s sleeping over at Taylor’s house, and he’s even hanging out with her mom, Andrea.

After spending the night with Taylor, Harry was seen out grocery shopping at Ralph’s with his sweetie and her mom and they all looked cozy together. Taylor even kept company with her beau while he was getting a huge pirate ship tattooed on his arm. For good girl Taylor, the tattoo shop excursion was a first. She’s more Talbot’s than tats after all but still posed in her sweet little dotted dress with owners of the Shamrock tattoo shop.

Styles and One Direction are in town for an appearance on X-Factor. This is the second time Haylor’s been spotted canoodling at X-Factor. Taylor had a guest gig on the show last month and 1D is appearing on tonight’s season finale of the talent spotting show.

And although the rest of 1D are headed back to merry old England after X-Factor wraps, Harry’s staying on with Taylor for a few extra days. Their sleepover is rumored to be ending before Christmas and the two will spend the holidays apart with their families.

But just because they’ll be apart on Christmas, doesn’t mean Harry’s far from her heart. Taylor’s shopping for costly Beatle’s memorabilia and is planning to splurge over $80,000 on her latest lover boy. Harry’s a huge fan of the Liverpool legends and Taylor wants to indulge him for Christmas. She’s been calling shops in the US and UK looking for rare Beatles’ autographed items for her lover. Harry dropped $1,500 on a fancy purse for Taylor’s birthday, but as usual, she’s going overboard.

Remember when she dated Conor Kennedy for about 5 seconds and plunked down $5 million on a house next door? It’s not like Taylor is known for her restraint or good sense when it comes to lavishing love and money to get as close as possible to her latest paramour.

Harry seems head over heels, but if it doesn’t work out, he’s more than likely to find himself the subject of one of Swift’s “out of love” songs. He can ask John Mayer, Jake Gyllenhaal, Joe Jonas and a bevy of other ex-lovers how it felt to hear the details of their break ups playing on radios around the world.