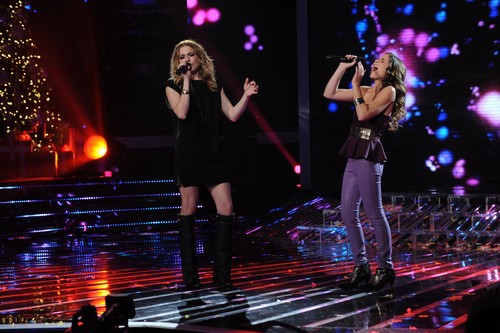 December 21 is supposedly the end of the world but yet we’re all still here without T-shirts to prove we survived, but the Mayan’s were not completely off base about the destruction that was to come this week. LeAnn Rimes may just be one person in civilization, but her life may as well be in ruins and Brandi Glanville is somewhere celebrating her rival’s downfall.

LeAnn brought her own apocalypse when she appeared on X Factor this week and sang along with 13 year old Carly Rose Sonenclar. The singer , and that term is being used rather loosely, garbled the words to her hit song ‘How Do I Live’ and stumbled around the stage as though she were looking for her next shot of Patrone. There’s nothing wrong with getting a jumpstart on happy hour, but this moment was supposed to be Carly’s. LeAnn had her big epiphany after the performance, blaming Carly for the reason why she sounded off key and couldn’t remember the words to her own tune.

“I was trying to help this 13-year-old girl who was having some trouble with the song,” LeAnn declared in the aftermath.

In the rubble of using a kid as a shield from more bad press, LeAnn backtracked. She must have sobered up, but Carly’s family wants to pick up a few more stones and throw her way. Her family told TMZ that Carly was a pro and LeAnn threw her under the bus because she got upstaged on her own song. Carly more than held her own, but also gave a gaunt looking LeAnn a shoulder to lean on who looked either too skinny or drunk to stand on her own. It could have very well been both.

LeAnn has denied being under the influence, but one hopes she didn’t spend some of her millions on the rapture in a blow out party. The world might not have been swallowed up into a hole, but she’s drowning in an abyss of her own making. She made her bed and it’s time to lay in it. Preferably at a rehab.