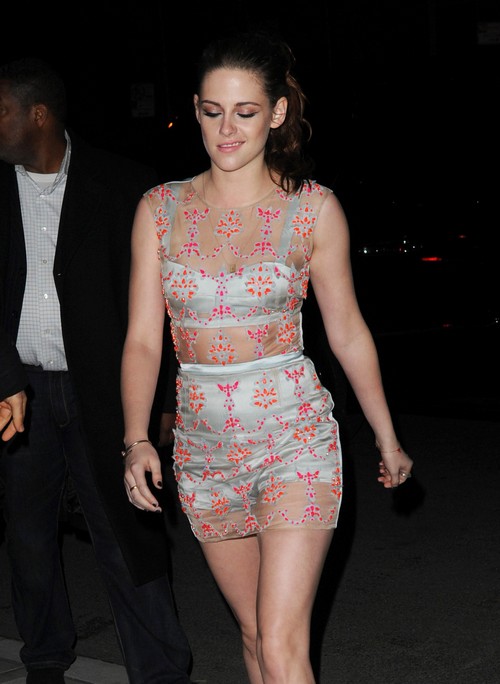 Robert Pattinson may have decided to take Kristen Stewart back after her public misstep with Rupert Sanders, but that doesn’t mean that things are going nearly as well as she’d like.  Being back together hasn’t meant that they are as close as they once were either. We’ve heard that Rob is (wisely) afraid to really commit to Kristen again and so while she jumps through hoops to make things like they once were, he still stays two steps back.

Kristen is paying attention to all of the little details that she missed the first time around and she had an epiphany, she realized that her man likes women with a nice rack and that’s something she doesn’t have.  Kristen prefers to be a makeup-less tomboy and run around in cut offs and kicks where he is drawn to girlie girls as a general rule. She is so desperate to hang on to Rob that she’s actually contemplating a boob job.

According to The National Enquirer,  “Whenever they’re out together, she’s always on high alert to see which girls seem to capture his attention, and they’re always girls with big boobs. She’s scared he may leave her for one of them. It’s an unhealthy obsession she can’t get out of her head.”

I guess it’s kind of nice to know that even the Kristen Stewart’s of this world have insecurities just like everyone else, right? But is she crazy to get implants for a man? I mean if she wants to make a change to get Rob’s attention then she could try dressing better off camera and using a hairbrush! Surgery is a pretty radical solution to a problem that could really be improved with makeup and a shopping spree!

Should she get the implants? Is it crazy to think that her breast size will be the key to saving her relationship? Tell us your thoughts in the comments below!