Rapper AP.9 Claims He Did More Than Take Photos With Coco 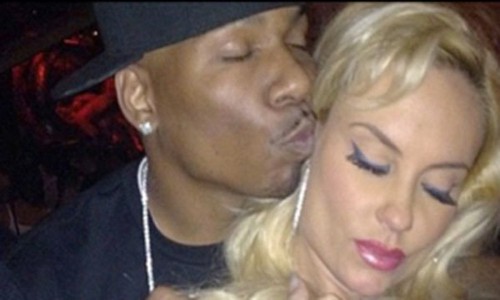 It sounds like things could get really interesting in the marriage of Coco and Ice-T.  Last week some racy photos of Coco turned up that showed her getting way too close to another rapper named AP.9. Coco is currently in Vegas starring in Peepshow and left her hubby behind in New Jersey while she pursues this new opportunity for herself. When the photos first popped up online Ice-T freaked the heck out, going on a Twitter rant about how disrespectful the photos were. Eventually Coco echoed his sentiment and apologized for publicly disrespecting her husband of nearly 12 years.

There was a hot minute where some sites speculated about the whole thing being a bit of a publicity stunt but I think as of this morning, that theory went out the window. AP.9 is now claiming that he saw a whole lot of Coco after being escorted to a private room. According to a source at Radar Online, AP.9 is shopping photos of Coco lying butt naked on his bed and let’s be realistic here, if he has the goods then a whole lot more went down in that room than just a photo shoot!

Ice must be flipping out thinking of his beloved Coco in a hot romp with another guy. Couples come and go but Ice-T and Coco have seemed, at least until now to be pretty rock solid. That’s not an easy feat in Hollywood.  Coco had been worried about leaving her man behind because apparently he is big on routine. She was originally worried that Ice would “fall apart” without her there everyday. I suspect he is a big mushball when it comes to his wife and I’m really not sure how well he would cope with proof materializing that Coco did hook up with AP.9.

Will their marriage survive what has clearly become a very rocky patch? Tell us your thoughts in the comments below!