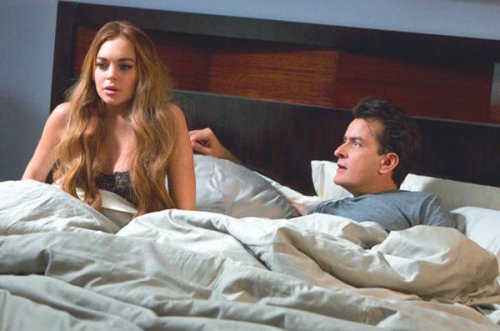 Wow – Lindsay Lohan must be a more talented actress than I’ve given her credit for. She talked warlock Charlie Sheen out of a cool $100k to help her clear up her back tax debts all while refusing to kiss him on the set of Scary Movie 5.

Although the script originally called for LiLo and Charlie to engage in tonsil hockey, Lindsay was so grossed out that she talked the director into changing up the script to keep her mouth far away from Charlie’s.

I’m of two minds on this – frankly I find the thought of snogging either of them utterly repulsive. She looks like she smells of Marlboros and malt liquor. And Charlie – where to start? His teeth are rumored to be mostly gone from the years of drug abuse. He’s got dental implants and dentures and still manages to look like he has the excellent dental hygiene of a meth addict.

TMZ revealed that both Lohan and Sheen had to sign release forms claiming they didn’t have any cold sores. Gross. That revelation just has me picturing both of them all crusty and oozy around the mouth. Super ick.

They brought in a smooching double for some of the scenes and other scenes were written out altogether. I wonder if the warlock was offended or if he’s accustomed to people being grossed out by him? Insiders on set said he wasn’t bothered by her embargo on their tongue play and the two made friends on set.

Turns out they were good enough friends for her to open up about her tax and debt woes. In turn, Charlie wrote her a check – no word if it was a gift or a loan – to cover $100,000 in back taxes she owes. I wonder if Linds actually turned over the loot to the IRS as Charlie intended, because her bank accounts were seized by the IRS a couple of weeks ago leaving her broker than usual.

Lindsay owes the IRS a total of almost $235,000 and her work prospects are untenable at best – especially now that she’s facing yet another stint in the pokie for probation violations. Maybe the IRS thought they should grab her cash while she had some in the bank (maybe it was Liz and Dick money…) and before her Hollywood star is permanently dimmed.