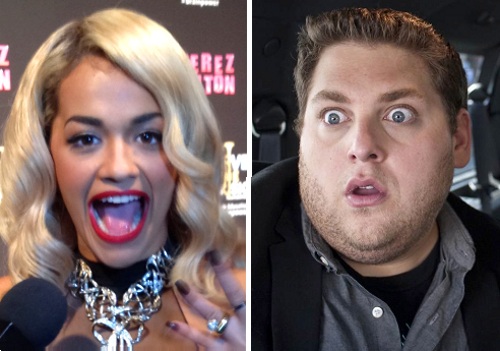 Rita Ora cheated on Rob Kardashian with Jonah Hill, it has been reported. The British singer who has allegedly slept with twenty men in one year during her relationship to Rob, had a one night stand with the actor after the two had met up in New York.

You might recall the youngest Kardashian venting on Twitter, claiming his ex-girlfriend was messing around with too many men. Well, it all makes sense, considering that Jonah has been single since September. Reports claim that when the two had first met, they clicked straight away and didn’t waste time to get back to their hotel rooms. Yuck.

“Rita spent the night with Jonah during a trip to New York,” an apparent source said. “Then Jonah bragged about it to friends, Rob found out and Rita confessed! That was the last straw.”

So, wait! Does that mean Jonah was the reason they split up?!?! What if Rob had never found out about her cheating on him… would she still be doing what she did? Either this girl is so desperate to make it in America as a musician, or she’s just trying to become the new Kim Kardashian. Ha. Don’t you think? Kim also slept with every celebrity so that she can become famous.