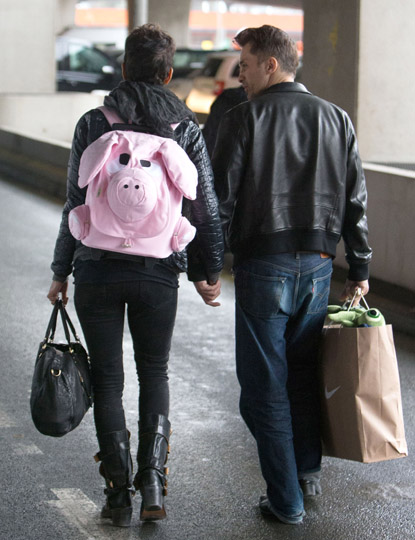 Paris may be the city of lights and love, but for Halle Berry, fiance Olivier Martinez and her ex Gabriel Aubry, it’s a huge source of controversy. Halle and Gabriel have been fighting over their sweet little girl Nahla Aubry for years now and in the last few weeks it has escalated to violence, restraining orders and arrests. Halle’s volatile fiance laid a major beat down on Halle’s baby daddy Gabriel over the Thanksgiving holiday.

But now it looks like this Christmas, there will be peace on Earth and good will toward ex-lovers. Gabriel’s got Nahla for Christmas and Halle gets Paris with her new lover. Halle looked sad as she and her beau trudged through Charles de Gaulle airport, but she perked up when Martinez gave his home country a fist pump to celebrate their arrival.

Halle wore a pink pig backpack – a sign that either she’s branching out in her fashion statement – or that she was toting Nahla’s backpack in anticipation of her daughter’s arrival sometime over the holidays. Halle’s Christmas in Paris will no doubt be bittersweet – remember she fought desperately in court to gain permission to move to France with Nahla, but Gabriel was successful in blocking the move.

To make up for time they’ll be apart on the coming holiday, Halle and Olivier took Nahla to see Disney on Ice, bought her a crown and both doted on her the entire evening. With Nahla’s Thanksgiving in tatters over the brutal fight between  her Dad and future step-Dad, no doubt all parties want to give Nahla a better Christmas.

The volatile trio have since dropped all of the mutual restraining orders that came out of the Thanksgiving fistfight that left Gabriel looking like the victim of a hate crime. Olivier was a pro boxer back in the day, so he was the wrong guy to brawl with and Gabriel’s got the black eyes and bruises to prove it!

No word yet if or when Nahla and Gabriel might join them in Paris. Since their daughter is just six years old, they can’t just stuff her on a plane for the long flight. I wonder if her Daddy will make the long flight with her to hand her off to Halle or if the nanny gets that privilege.

Halle argued in her court case that life in France would be safer for Nahla because of the paparazzi laws, but there were plenty of paps on hand to snap pics of her with Olivier when they got off the plane, throughout the airport and even in baggage claim. It annoys me to no end when celebrities decide that Europe is classier and smarter than American (even if it is) and adopt the customs and then look down on the rest of us. Remember how Madonna moved to England and then started getting really British – accent and all? I wonder if Halle will develop a Pepe le Pew accent if she’s there for a prolonged period. God I hope not!