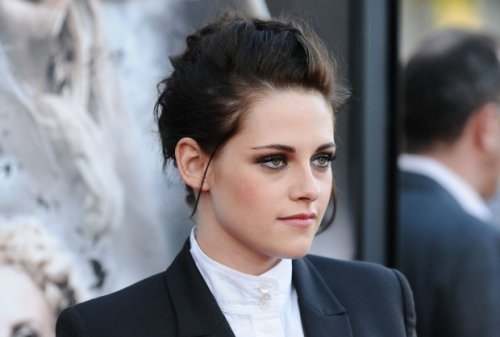 In news that could push Robert Pattinson over the edge, Kristen Stewart has signed on for the Snow White and the Huntsman sequel. You’ll remember she broke Rob’s heart when Kristen was snapped by paps getting hot and heavy in her mini with Snow White director Rupert Sanders. But Rob can relax, while Kristen and Chris Hemsworth both got picked up for the dark fairy tale’s sequel, Rupert Sanders got the axe!

With her usual wit and verbal acuity, Kristen told IndieWire, “Oh, it’s gonna be fuckin’ amazing. No, I’m so excited about it, it’s crazy.” When asked if there were good ideas for the sequel’s script that’s still in the works, the seemingly reformed trampire said, “Oh my God. Fuck, yeah. Absolutely.” It’s no wonder Rob’s crazy about her – she’s such a lady and speaks so eloquently and intelligently. Jeez.

The rest of Kristen’s Q&A about the Snow White and the Huntsmen sequel was equally unintelligible – suffice it to say, she’s f-in excited. But what about Rob? Even if Sanders won’t be on set, doesn’t the specter of that movie haunt him? That’s where she met the guy she cheated with – perhaps was even cheating with him on set… How is that supposed to make Rob feel?

RadarOnline says it came down to the studio having to choose between Stewart or Sanders. With Kristen coming off the ridiculously successful final Twilight installment and her highly anticipated turn as Marylou in Jack Kerouac‘s On the Road, she’s the hotter property by far. A source close to the production told RadarOnline, “However, Rupert Sanders definitely won’t be a part of the project. Rupert didn’t want to be a part of it to begin with because he is desperately still trying to save his marriage. The search is still on for a new director.“

It’s no wonder that Kristen jumped at the Snow White and the Huntsman sequel – the only projects she’s got in the pipeline are those that she was signed on for before news broke about her affair with Sanders. Since then, she’s seen a slow down in scripts. An insider close to Stewart told RadarOnline, “It’s distressing to Kristen that Rob is attached to four separate movies over the next year-and-a-half. Even her Twilight co-stars, Taylor Lautner and Ashley Greene, are more in demand than ever, with both committed to two different movies each. Kristen just hopes that that the fallout over her relationship with Rupert doesn’t hurt her career.”

I’m not quite so thrilled with the sequel announcement. Despite it generating almost $400 million at the box office, I thought Snow White and the Huntsman was an overblown disappointment. It seemed like glum Bella Swan got dropped off in the forest with a sword – no vampires, but other creepy stuff. She didn’t show a lot of range. I’m also curious if somehow Rupert Sanders ends up attached to the sequel, will Stewart stay on? Would she prioritize her faltering career or her faltering relationship? Hmm… I wonder.