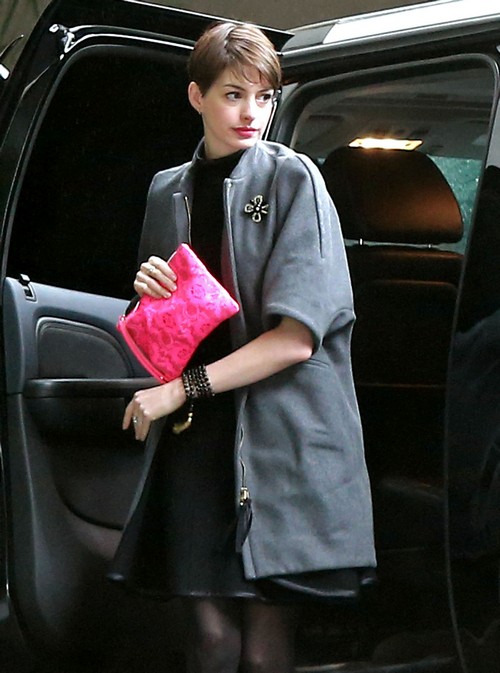 Anne Hathaway does it all—she is Cat Woman, all fit and tone, Jane Austin, passionate but oppressed, and Fantine, a sickly prostitute during the French Revolution. The actress is so devoted to her craft that she dropped 25 pounds in one month by eating nothing but oat cakes in order to have the sickly body required for her prostitute character in Les Miserables. But apparently one fan didn’t get the memo about how unhealthy she had to be, and boldly asked her to give his fat wife her diet secrets!

A source reported to the National Enquirer, print edition December 31, 2012, “World’s Dumbest Hubby suddenly blurted, ‘Hey, Anne, maybe you could share how you lost that 25 pounds with my wife. She’s tried everything, but nothing seems to work!’” As if that weren’t horrific enough, he was totally star struck, gushing, “You look absolutely perfect!” in front of his wife!

The eyewitness expects the wife was about 40 pounds overweight, and turned to her husband yelling, “What? Are you kidding me? Did you just ask her for a diet for me? And what, she weighs like five pounds!” The wife marched out of the bagel shop and Anne whispered to the husband, “I think you’re in trouble!” before he rushed out to catch his wife before she filed for divorce.

What’s funny about this entire story is that Anne is desperate to put the weight back on, but wants to do it slowly and healthily, instead of all at once with an extra large vegan pizza. So the husband was basically complimenting her anorexic looking, curvy-as-an-8-year-old boy, sickly, too think body. And calling it beautiful. We think this woman could probably do better than her husband, and that this entire situation is a perfect example of the so called Hollywood beauty! If Anne Hathaway has to drop 25 pounds in a month to look “absolutely perfect,” I don’t want to live so close to La La Land anymore! What do you think of this crazy circumstance?