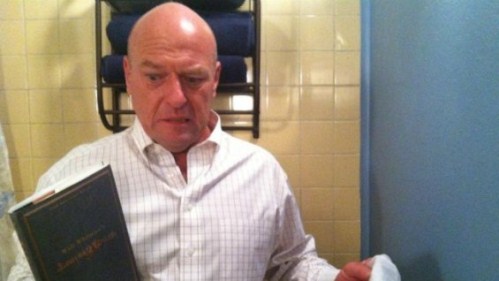 The critically acclaimed AMC series “Breaking Bad” is at the end of the second half of its fifth season, and Dean Norris, one of the series’ lead actors, recently revealed a very telling tweet in which his character, Hank Schrader, sits on a toilet and faces a rather cray-cray dilemma. In the image, Hank holds a Walt Whitman tome in his one hand and stares at something in shock and disgust. It could be an ironic and hilarious situation; or it could just be a random cockroach going on its merry way.

Norris, who recently joined Twitter, has been uploading a series of spoilers about his critically lauded television series. He also tweeted that the upcoming episode will be titled “The Decision” and that fans of the show will know what it’s all about. According to a report on Aceshowbiz, “Viewers wouldn’t have a hard time figuring out that the episode would be all about agent Schrader coming to a decision about the revelation that someone he knows well may be the one person he’s been chasing all this time.”

Breaking Bad is one of AMC’s most popular television productions. The show tells the story of the terminally ill Walter White (Bryan Cranston) running a meth lab with one of his former high school chemistry students. Breaking Bad has been lauded with Emmy Awards, Golden Globe Awards, and Screen Actor’s Guild Awards throughout its extremely popular five season run on the network. The show has also been called “the greatest television show of all time” and received universal acclaim for its strong thematic content, humour, and overall quality.   Metacritic, an online critic aggregator, rated Breaking Bad as one of the best series on the website and scored the fourth season of the show 99/100 – one of the highest scores in the site’s history.

Check your local listings for more information on air dates and times.