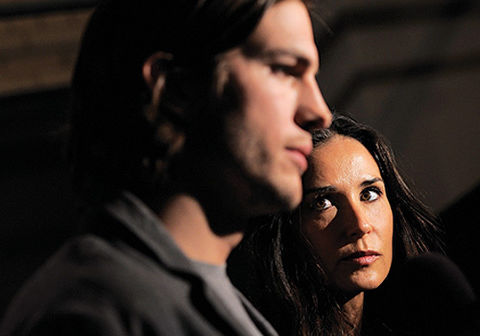 Do you smell what we’re smelling? A bunch of lies. Demi Moore is now telling people that Ashton Kutcher‘s filing for divorce papers doesn’t surprise her, but people shouldn’t make it look like she is the bad person for dragging the whole situation on for over a year. The two who split up in November, 2011 had gone their separate ways after Kutcher moved out to give the actress some space.

But that wasn’t the case. Demi actually told Ashton that she had wanted a divorce from Ashton as soon as he moved out, TMZ claims. She planned to file the divorce in 2011 but could not do so after her financial issues got in the way of things. Great excuse, right? Since when does that keep you from sorting your divorce out.. for over a year?!!? Oh Demi, Demi, Demi.

Oh and if you thought Moore is upset about Ashton filing the papers last week, she isn’t. The 50-year old is said to be genuinely happy and plans to do no harm to herself following the news that Kutcher wants her out of his life completely. Ashton probably wants to marry Mila Kunis.