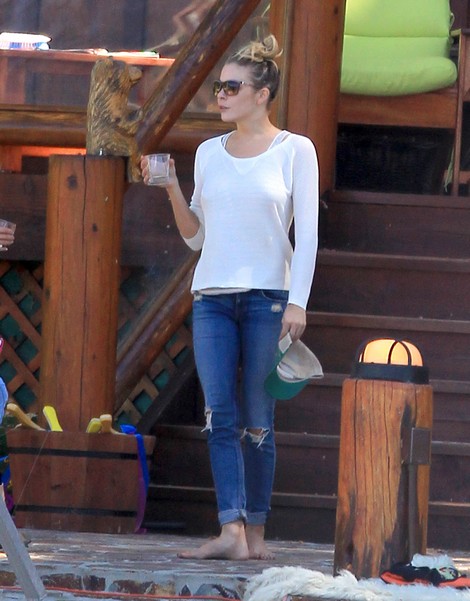 The only way this makes sense is if Eddie Cibrian is looking to leave LeAnn Rimes for Brandi Glanville! In a bizarre yet fact-check-able story, LeAnn seems to be copying ever move that Brandi makes. The singer has been struggling with mental health and self worth for years, and checked into a rehab (more like hotel/spa than rehab, if you ask me) briefly over the summer to address self confidence issues, but it doesn’t seem to have done her any good. The adulteress is all over Twitter, trying to steal Brandi’s children by calling them “my boys,” and now Brandi’s friend has come out to show exactly how desperate LeAnn is to become Brandi 2.0!

Jennifer Gimenez, Brandi’s friend since 1997, explainsto Star Magazine, print edition December 31, 2012, “LeAnn has severe problems and no self-esteem or self-worth. She copies everything Brandi does. She even exchanged her black Range Rover for a white one because that’s what Brandi drives! If Brandi gets a new bag or shoes, within a week you will see LeAnn do the exact same thing!” Okay, benefit of the doubt: maybe they have the same taste and it’s coincidence every single time?

But other sources report that LeAnn goes to all the same doctors, tweets the same pictures, and wears the same outfits–all just days after Brandi debuts them! Brandi took to Twitter to address her unwanted twin, saying snidely, “Someone is obviously stalking my facebook & copies my every move, even my bikini pics!! Creepy! I said it once and I will say it again STALKER!!” We have to agree! LeAnn is mentally unstable, but why she does this is still hard to say. One source claims she thinks that if she acts like Brandi, Eddie will never leave her. “Which obviously makes no sense,” the source comments, “because Eddie cheated on Brandi with LeAnn!” I say girl needs a good round of shock therapy–or is her stalker syndrome incurable?