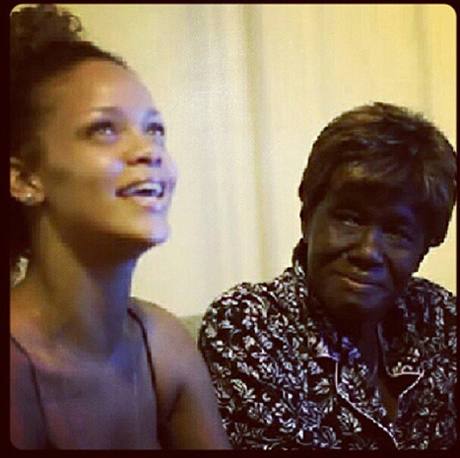 How proud would Gran-Gran Dolly be? Rihanna has donated $1.8 million to a Barbados hospital in honor of her late grandmother, who passed away in June after battling cancer. The singer who is currently in Barbados (allegedly with Chris Brown) decided to put the total sum of her donation towards the radiotherapy department.

The hospital, named Queen Elizabeth Hospital in Bridgetown Barbados, has renamed the department Clara Braithwate Center for Oncology and Nuclear Medicine (Dolly’s real name), supposedly after the Bajan-singer made the offering. Rihanna visited the hospital on Saturday where she said in a statement that her help towards the radiotherapy department is going to help her hometown tremendously to save other people’s lives.

She says: “This was my way of giving back to Barbados, in a form of philanthropy, by assisting the QEH in its continued modernisation program… I believe that this will have a huge impact on the people of Barbados. This was all done to save lives or at least extend them.”

Rihanna is spending Christmas and New Year’s Eve in Barbados with her family, and though it has been said she is there with Chris Brown, we haven’t seen any snaps of the two heading out together. Hmm. Not so sure about this.