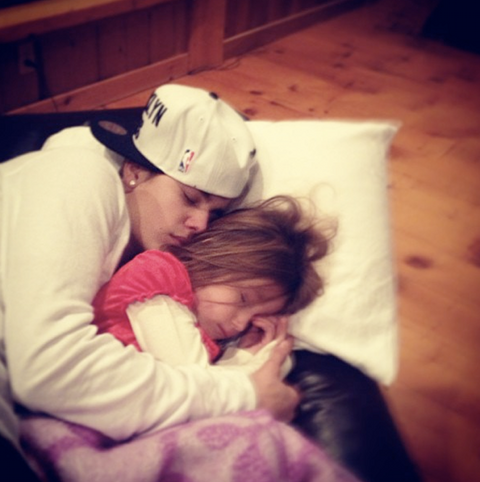 It’s hard to hate even the sleaziest celebrities on Christmas,  but here’s trying! Justin Bieber has been making news lately since he started a relationship with Victoria’s Secret model Barbara Palvin, with whom he was last seen publicly earlier this month in Miami. We’ve read that Selena Gomez can’t move on and keeps giving him chances, but he just won’t take the hint! Now he’s using marijuana and hypnosis to avoid the relationship stress, so it’s only a matter of time before the two split for good.

Justin is spending Christmas in Canada, while Selena celebrates with her family in Los Angeles. The two connected with Taylor Swift and Harry Styles in Utah to hit the slopes, which has a certain level of holiday cheer in it. But then yesterday he tweeted, “im where im supposed to be” which could be interpreted physically (in Canada, with family), emotionally (with Barbara, not Selena?), or universally (an internationally famous singer, millionaire, etc). Earlier, he shared a photo sleeping with a girl, captioned, “With my luv.” People were shocked–especially since she’s so young–but don’t worry guys, it’s just his super adorbs little sister Jazmyn Bieber, who is 5!

I guess it goes to show that, no matter how much of a player you may pretend to be, there’s always time and room for family. We hope that Justin can be a good role model for Jazmyn, and teach her to never allow a guy to treat her the way Justin treats Selena! But no more judgment–merry Christmas!