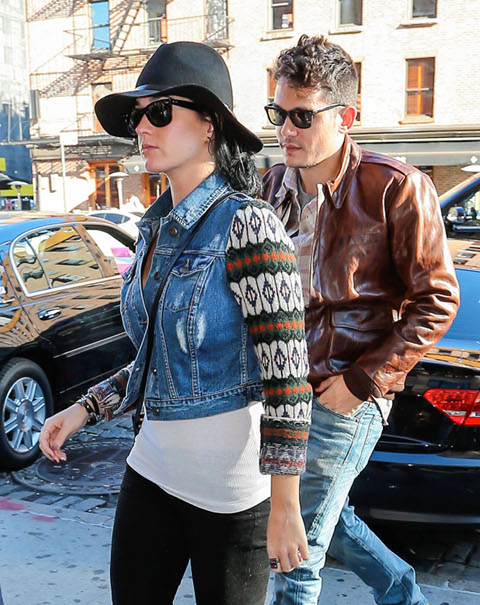 That sounds like a super awkward situation! Barely a year after her divorce, Katy Perry is overwhelmed by her relationship with playboy and sex addict John Mayer. We’ve read reports that John is sexting other women, and actually has a secret kinky sex parter behind her back, but that hasn’t been enough for Katy to dump him. In fact, they’re spending the holiday together!

An insider, however, has crushed these affair rumors, as reported by People Magazine online: “That is absolutely not true. John would never do that to her, and Katy really trusts John.” Well, of course–but the tabloids did claim she had no clue about the affair. What do you think? Either way, Katy has brought him home to celebrate with her family. The insider reports: “They’re happy together and with her family for the holidays. John really likes getting to know Katy’s family better.”

Even though we love the idea of Katy Perry in a happy, healthy, stable relationship, it seems too good to be true! John has a bad boy rep for a reason–don’t forget how badly he crushed Taylor Swift! The guy looks like a conniving louse to me, but to each her own! Apparently Katy likes what she sees, and the source explains, “they’ve spent a lot of time together and really enjoy each other’s company. John is entirely focused on Katy.” We hope they’re having a nice, calm holiday together–one free of sexting other woman, stalking ex-husband Russell Brand (on Katy’s part!), and family drama! Do you think John is cheating? Or is he reformed?