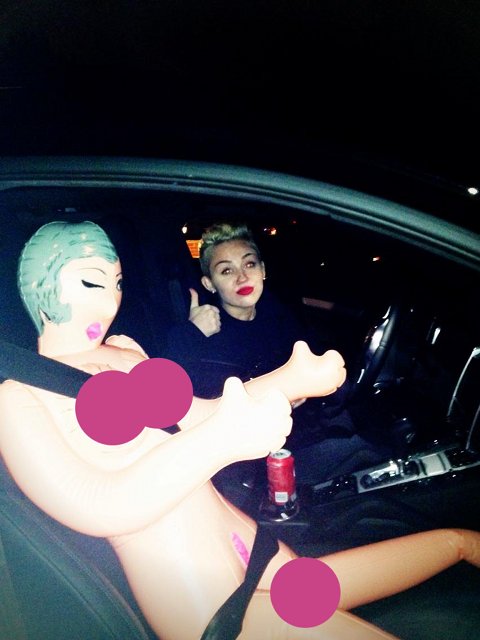 Miley Cyrus has transitioned from PG Disney star to unpredictable rebel youth flawlessly–and with minimal awkward fashion faux pas! The singer/actress has been involved in a few lesbian scandals, a viral drug video, and has starred in a music video with a porn star, but that doesn’t mean she isn’t a good role model! Or so we thought–I always defended her for rescuing dogs and supporting equal rights, but now I have to wonder. The engaged star shared a scandalous nude photo on Twitter, showing a sex blow up doll strapped into the passenger seat of a car she is driving.

“Does this count for the carpool lane? Such a nice Xmas gift” she captioned the above picture. The singer, whose next album is due out next year, has no qualms about sharing the more adult side of her life. She joked that a stripper was a must for her birthday party, and photos surfaced showing her grabbing the naked butt of a female stripper. She grabbed her crotch repeatedly during a concert, and has been wearing a lot of leather and studs. It’s hard to say if this is just Miley having fun messing around, or if it’s a real lifestyle change (from Disney to exotic dancers?) but it’s fascinating to observe!

In her defense, Miley doesn’t seem to be doing anything hateful, dangerous, mean spirited, or illegal–in fact, she’s quite tame compared to some of her contemporaries. I say she’s just having a bit of innocent, if not scandalous, fun–enjoying every moment of life and raising a few eyebrows while she does. Do you think Miley is out of control, or just giving into her wild side?