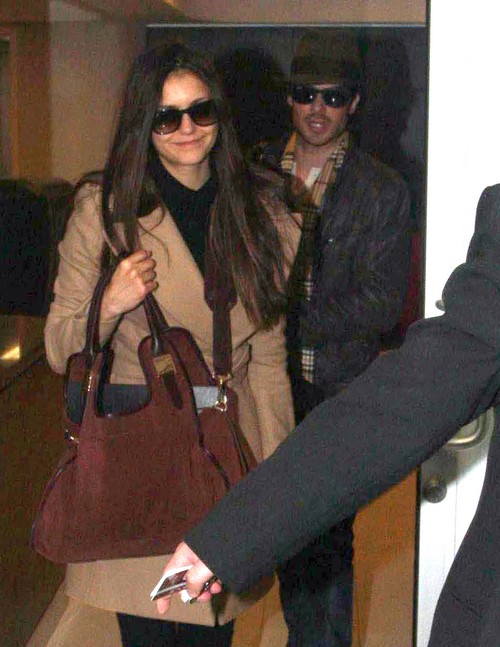 Boy do Ian Somderhalder and his Vampire Diaries’ girlfriend, Nina Dobrev get around! The couple of more than a year has recently been spotted in South Carolina and LA. Then they spent Christmas together in Utah where Nina is rumored to have rented a house for her entire family to stay, play and enjoy the holiday together. Now according to the brunette stunner an even longer trip was what was up next. On Christmas day she posted on her official Twitter page, “And I’m at it again… Packing – but this time for CHINA! Leave in the morning and connect a bunch of times. It’s going to be a lot of Travel but its so worth it – I’m so excited !!! Can’t wait! My first time to Asia!“

The lovebirds were indeed spotted departing LAX earlier this morning looking understated yet stylish as ever. Nina was aiming for comfort, traveling in black leggings an overcoat and suede boots while her man opted for jeans topped with a leather jacket and brown fedora. No word yet on why the two were headed to China but it sounds like it could simply be a dream trip for the couple to enjoy an extended holiday.

The real question hanging in a lot of fans’ heads is whether or not Ian will be cast in the coveted role of Christian Grey in the film adaptation of Fifty Shades of Grey.  Fans of the book seem to heavily favor the actor and a recent series of short films that he starred in looks like it could double as a screen test for the role. He cleans up great and can pull off the part of sophisticated bad boy with a very serious edge. Are you a fan of this low key couple? Are you hoping to see Ian light up the big screen sooner rather than later as Mr. Grey? Tell us in the comments below!