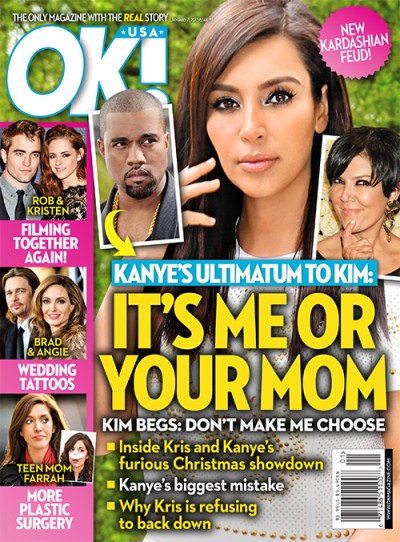 Kim Kardashian has every single luxury that money can buy but she definitely  doesn’t have control over her own life. On the one side is her mother, Kris Jenner who is more of a manager than an actual mother. She has raised Kim to BE the family money maker and has plotted out every single step of her career (in spite of not actually having a set occupation), making sure that Kim is in the spotlight every day of her life. On the other side is Kanye West, Kim’s boyfriend of about 8 months. Kanye has supposedly loved Kim for eons but even he did a double take at her high paid escort sense of style. He tossed out racks of clothes earlier this year and molded her into his idea of the “perfect bitch” to be on his arm at different events. Kris and Kanye apparently have a very different opinion of who Kim should be and how she should carry herself and if the latest issue of OK Magazine is to be believed, they butt heads often.

So often that now both are supposedly fighting over who has more control over Kim and it has gotten to the point where she’s going to have to choose. Kanye has had enough of Kris’ meddling and he wants a woman that can hold her own. Kris is at the opposite end of the spectrum, believing that Kanye has already overstayed his welcome in her families lives. In other words, they are one and the same. Neither thinks that Kim can or should be in control of her own wardrobe let alone her life!

Will Kim actually make a choice between her mother or her boyfriend? Better yet, will she finally decide to live her own life? Tell us your thoughts in the comments below!