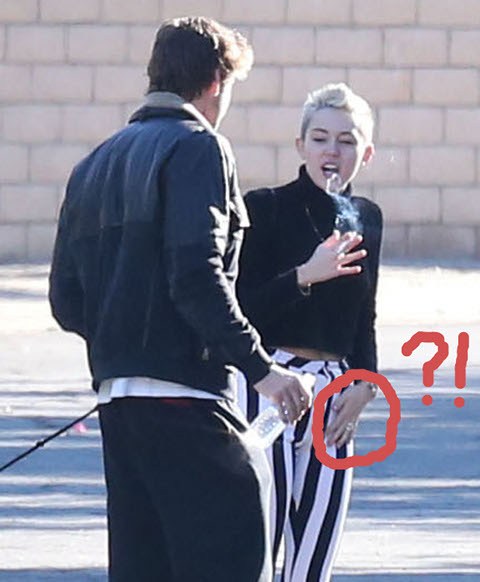 In what may go down in history as one of the best kept celeb secrets ever, all signs are pointing to a top secret wedding for Miley Cyrus and longtime boyfriend Liam Hemsworth this Christmas! We previously reported that Miley was pushing fashion boundaries (and not in a good way) when she left a family Christmas party wearing stripped pants, calf-high army boots, and smoking a cigarette–the grossest accessory! But we didn’t notice that she was sporting a second ring on her ring finger. She’s been spotted out and about before, wearing the huge diamond engagement ring Liam proposed with earlier this summer, but a second wedding band is traditional! And in family Christmas photos shared by Liam on his Pheed account, we see him wearing a big band on his ring finger! So what gives?

Miley has been acting her wild self lately–partying with strippers, driving with sex dolls, and strangest of all, spending a quite night at home by the fire. (Of course, normal people do this all the time, but it’s weird for Miley! Could a small wedding in front of a big hearth have been what happened?) But these photos can’t lie, and it can’t be coincidence that they both start wearing wedding bands on the same day! These rings could just be Christmas gifts to each other, but who does that? I think a wedding is to blame! And today, Miley tweeted, “I could never love again…. Cause he’s the only one for me Jolene.” Which is a line from her new Dolly Parton cover from her Backyard Sessions–but it’s also (I think) a very coy response to the wedding rumors! Do you think Miley Cyrus has become Miley Hemsworth? Was the wedding party totally comprised of their adopted dogs? Was there a dress? We can’t wait to learn more, but only time will tell! 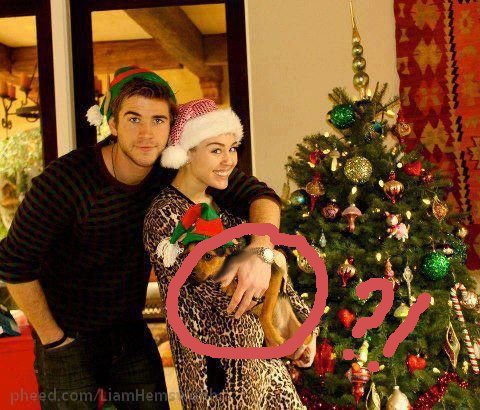