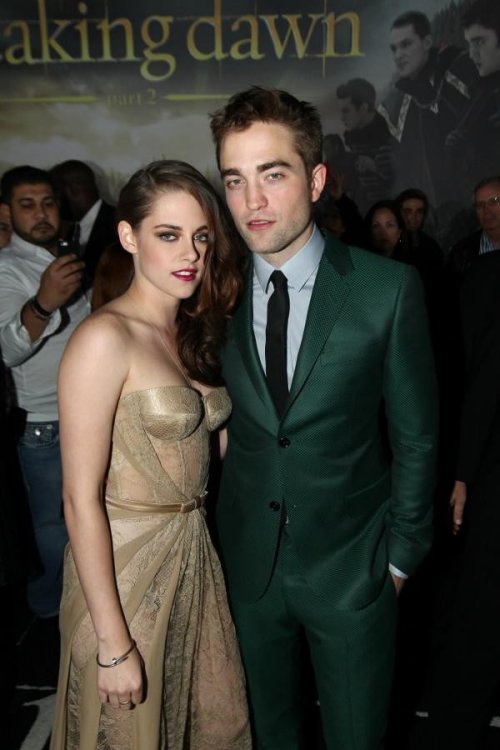 In news we could have totally predicted, Kristen Stewart and Robert Pattinson are breaking up… but not for a couple of months. That’s right – Rob has given her the heads up that February 14th is the big day for a shake up in their relationship. A source close to Rob told UK’s Now magazine that come V-Day he’ll decide their fate and it will be “all in or all out.” I’m thinking it’s going to be all out – unless of course one or the other of them needs a career boost.

After all, their “trial basis” reconciliation was perfectly timed to align with the premiere of the last installment of the uber-profitable Twilight series. I find it hard to believe that their love life is perfectly synced to their film’s promotional schedule. It’s plausible that the romance blossomed on set and since they’ve been making the movies non-stop for the past several years, I can even believe that they’ve been carrying on a genuine love affair for awhile. But since Kristen so spectacularly shamed Rob by launching into an affair with Rupert Sanders, their reunion seems dodgy and insincere.

On the red carpet for Twilight – Breaking Dawn, Part 2 – they stand together, they smile and they try to look smitten, but it looks hollow and contrived. They are not the giggly, whispering lovebirds of premiere’s past. They’re just essentially mobile cardboard cutouts positioned close together for photo ops.

Now’s source added: “Rob’s planning to skip most of the upcoming awards parties and spend January focusing on his relationship. He’s set a Valentine’s Day deadline to decide whether he’s in it for the long run. So there could be a proposal on the cards – or a decision to end it.”