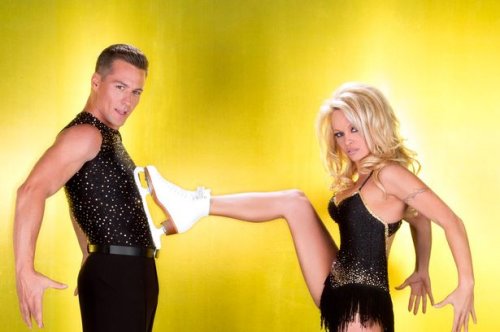 I just have to start by asking how broke is Pamela Anderson? After all, the hallmark of a celeb in financial trouble is their presence on reality TV. Pam has done not one, but two turns (no pun intended) on Dancing With the Stars and has now agreed to skate in Dancing On Ice on UK’s channel ITV1. I wonder if this is an instance similar to celebs heading to Japan to do lucrative product endorsements they hope no one in America will ever see…

Pam’s not just looking to turn a buck – looks like she may be flat broke. She reportedly owes over $370,000 in back taxes. As bad as this sounds, she’s actually been in deeper before. In 2009 she was slapped with a $1.7 million tax bill. Pam has been paired up with Matt Evers, an American professional skater. The eighth season of Dancing on Ice starts January 6th and I hope we can look forward to seeing clips of the buxom former Baywatch babe on skates on entertainment news shows. If she splatters spectacularly, we can look forward to seeing her on The Soup.

The UK media is saying Pam’s an early favorite to win based on her performance in preliminary rehearsals. Growing up in Canada, shouldn’t Pam already know how to skate? Doesn’t everyone in the Great White North play hockey and ice skate? Pam’s competing against rugby stars, Olympic athletes and soap stars. What I’m wondering is whether we’ll see Pam skating in a little red one piece akin to her Baywatch beach wear. That’s likely to win her some votes, so I’m predicting we’ll see an homage of sorts… 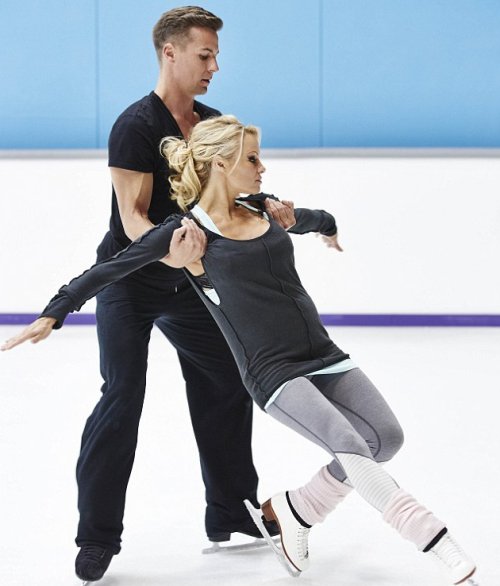 Pam’s partner on ice Matt Evers is excited about getting to sling Pam around saying he “pinches himself every day. I go into work every day and let me tell you what, Christmas has come early.” For her part, Pam says, “‘I am actually excited to be taking part.” Wow – that’s a sort of enthusiastic endorsement I guess.

Even though we all know she’s broke, Pam has insisted she’s not Dancing on Ice just for the money. Pam says, “As a Canadian I thought I’d better learn how to skate, and what better way than having a pro teach you for two months. I didn’t skate when I was younger. I always thought I want to skate with my grandkids.”

Pam also revealed her plans after Dancing on Ice and they’re pretty ambitious. The former Playboy centerfold and Baywatch babe says, “I want to do Broadway, I want to do musical theatre. I’ve been learning how to play guitar, doing a lot of musical stuff lately. When I first moved to L.A., I was asked if I wanted to have some kind of music career. I said, ‘No, that’s silly.’ I couldn’t even believe I was doing what I was doing on Baywatch.”

And when she was asked about more reality TV adventures, Pam said, “I feel like I’ve done a little bit of everything. Who knows how much longer I’ll be doing this so I might as well just do everything I possibly can.” Unless she gets all of her taxes paid off, I’m sure we can expect to see Pam on more reality programs – she still hasn’t done Celebrity Big Brother, Celebrity Apprentice, I’m a Celebrity Get Me Out of Here. Wonder if she’d be willing to pile on the pounds to get chubby enough to appear on Celebrity Fit Club?

I can’t wait for the January 6th premiere of Dancing on Ice. I wish Pam good luck for the win on ice – but come on, don’t we all want to see her skidding across the rink in an epic fail? Either way, it will be entertaining!