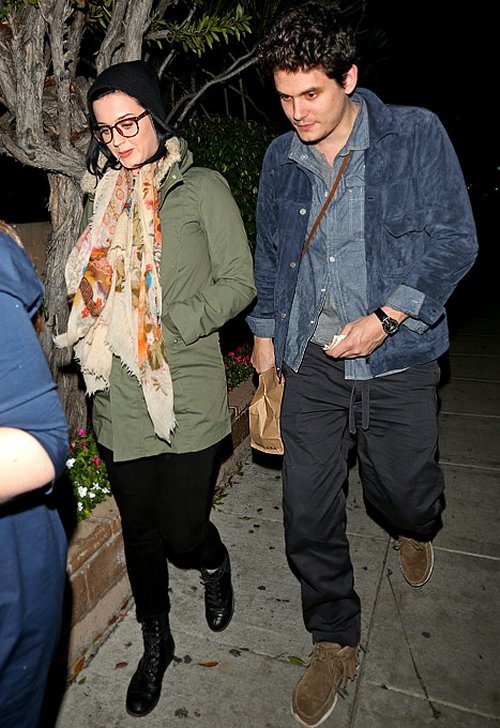 I thought for sure after their initial flame out that Katy Perry and John Mayer were dunzo for good, but he’s the king of dragging dead relationships out. Remember how he was off again, on again with Jennifer Aniston for soooo long? But after about a five second break-up, Katy and John have been on again for months and are even spending a low-key Christmas in Santa Barbara with the California girl’s folks.

What’s got me wondering if it’s love for realz is their decidedly sloppy appearance together out to dinner in Bev Hills at Matsushia. Katy looks like she’s wearing togs from her Last Friday Night video shoot. She’s in oversized 80’s looking tortoise shell specs, a military style olive and sherpa lined coat, black jeans and combat boots. To top it, she slapped on a knit cap that would make Family Guy’s Meg Griffin proud. And if the frumpy ensemble wasn’t enough, Katy was sucking on a toothpick, making her look even more low rent.

Mayer, who generally is more sloppy than suave, is wearing what looks like drawstring pants topped with a henley and then a couple of layers of frumpy denim shirts. To make this horrid ensemble worse, the strap across his chest seems to indicate that the rocker is rocking a man-purse of some sort.

If John and Katy are willing to go out in public dressed this awfully and let the paps get snaps of them all schlumpy, I can only conclude that it’s a love match for these two. They seems to have slid right past that stage where they want to look attractive for a partner they’re trying to lock down. See this pic below? This is how good this attractive duo can look if they shower up and put on clothes that weren’t at the bottom of the hamper: 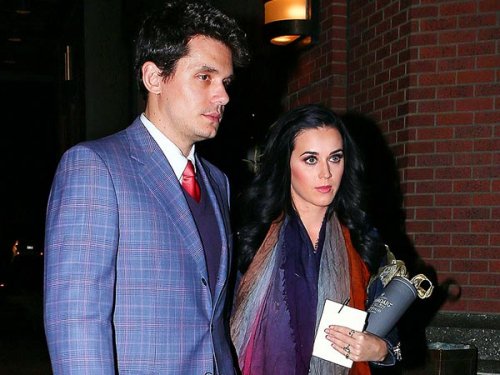 I personally love John Mayer’s music, but think he seems pretty douchey otherwise. And from what I saw of Katy Perry on her brief guest stint on American Idol, she can be pretty bitchy. Maybe their less likable attributes are what attracted them to each other. I don’t get it. But on the plus side, if these two are hooked up for good, they won’t be out glomming on to other more likable celebs. So congratulations on your sloppy love affair John and Katy – we hope it works out… I guess…