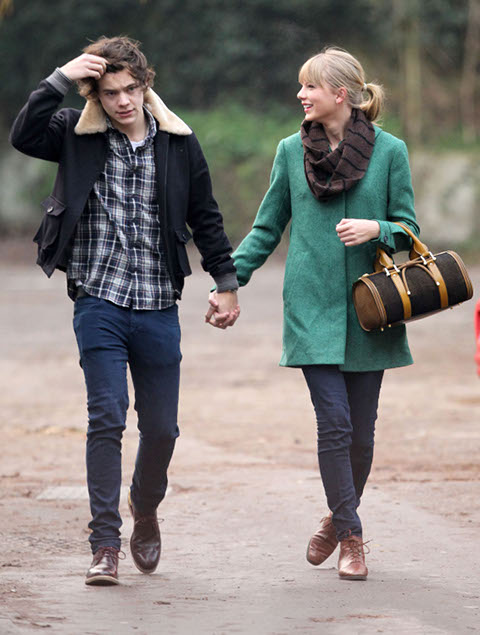 We all know that Taylor Swift is a little loopy. The barely 23-year-old singer has talked about babies a dozen times, always envisioning a dozen kids in a Martha Stewart perfect home. She wears the cutesy 1950s housewife dresses. She is lavishing her current baby, a cat called Meredith, with love and fame. But now she’s ready for the real thing, and she’s looking for current boyfriend Harry Styles to help her out!

An insider reported to Ok Magazine, print edition January 7, 2012, that Taylor is pushing Harry for a baby. “He’s terrified, but trying to laugh it off. Harry and Taylor are having a lot of fun together, but there are huge differences between them–the main one being that she’s wise beyond her years after being in the spotlight for so long.” Now, calling Taylor wise seems like a bit of a stretch. Girl knows now to avoid a public scandal, for sure. But is that all that wisdom is? I don’t think so! The man-hater, boyfriend-user is wise enough to know that famous boyfriends equal more fame, but that’s all!

Taylor has been on the baby track since summer, the insider reports. In fact, she dumped Conor Kennedy when she realized he wouldn’t fall under her spell and start popping out kids!And now she’s pushing Harry away too. “Every time she goes ga-ga over a baby, he struggles not to flip out. There’s no way he’s even remotely interested in having a baby. he’s a good ten years away from something like that.” Do you think Taylor is looking to be a mother, or is this all tabloid fodder? We know she has babies on the brain–she even dedicated a whole song off her album Speak Now to her child fans. But is she going to quit the fame life to stay at home and play mommy?