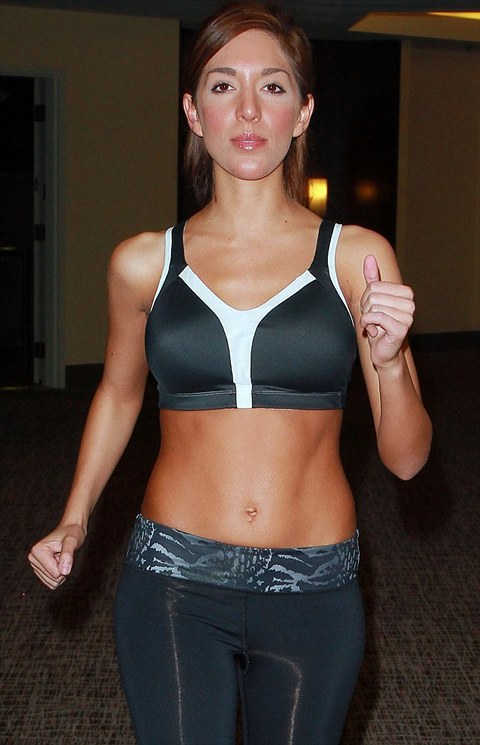 It’s easy to talk about how destructive Hollywood’s image of beauty is, but Teen Mom star Farrah Abraham is now a walking caution sign! The young mom is noted for being a total brat to her parents, and is typically selfish and immature. She went under the knife in 2010 for breast implants, and again last month for a chin implant and nose job to correct her ugly profile (her words, not mine! I thought she looked fine before!).

But now her motives are becoming more clear: Farrah is desperate to look like plastic surgery queen Kim Kardashian! A source reported to Ok Magazine, print edition January 7, 2013, “Farrah thinks Kim is gorgeous and she feels like she and Kim look a lot alike, especially now that Farrah’s had her nose and chin done. But as far as Farrah is concerned, Kim is still prettier. Farrah’s decided she needs to get cheek implants because she doesn’t have enough definition in her face. And she wants to be a D-cup, just like Kim.” Is anyone else disgusted that doctors do this sort of thing? I mean, this is a young woman who should be focused on raising her daughter, not on throwing more than $20,000 into plastic surgery!

The pal explains that Farrah thinks the surgery will help her career. “Farrah’s had a lot of success on MTV and writing her book, but modeling is what she really wants to do. And even with her new nose she’s not getting the kind of work she was hoping for. She’s desperate to have a proper modeling career and she says she’ll do whatever it takes.” Has she not seen America’s Next Top Model? Doesn’t Tyra Banks always say that weird faces make the best models? And that it isn’t about how you look, it’s about knowing your body? I wish that Farrah would cut it with the scalpel and focus on raising Sophia. Do you think her Kim obsession is warranted?