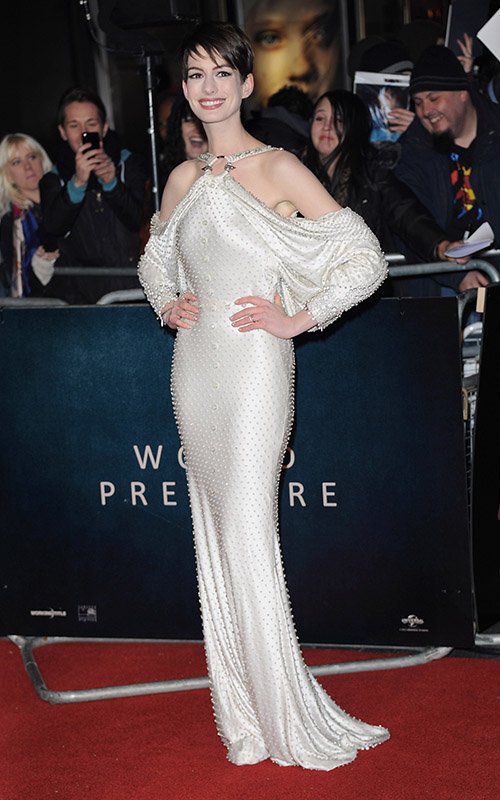 Ugh, this woman is so many things and ‘annoying’ can officially be added to that list. Anne Hathaway is now recalling the day she had to cut her hair short for the role of a lifetime in Les Miserables. The actress who plays Fantine, a poor, single mother in the musical film, has said that when producers told her she’d be going absolutely short when production starts, she was really upset.

This shows you that Anne is dumb.. Princess Diaries kinda dumb (if you know what we mean). As an actress, you should be willing to take on roles that are challenging and seeing this woman say that starring in Les Mis was her all-time dream role, why is she getting so upset over cutting her hair?

Well, she told The Mirror: “I called my husband [Adam Shulman] and was on the phone with him. I looked in the mirror and I said ‘I look like my gay brother. I’m just Man Hathaway’. I realized I couldn’t take it back. It had the effect of changing my identity. I was reduced to a mental patient level of crying… I was inconsolable.”

She continued: “I put it up there with the most difficult things I’ve ever had to do, which I wasn’t expecting. I didn’t think I was that vain. There was nothing I could do to prepare for it. You train the stunt, you sing the song, you train your voice. This was just letting it happen and accepting whatever the results were going to be.”

Whilst reading the script, Dumb Hathaway (no typo) understood why she needed to cut her hair. Her character sells her teeth and her hair to try and provide for her child, which prompted the actress to say: “When I got cast and I read the script, and I knew they were keeping the hair cutting in, and then I read the book and it’s such a devastating scene.

“I thought doing it for real might raise the stakes a bit. And I guess in the back of my mind, I thought it if was a painful experience watching her haircut, then watching her teeth get pulled would be really painful.”

Well.. she makes a good actress but a pretty stupid human being.