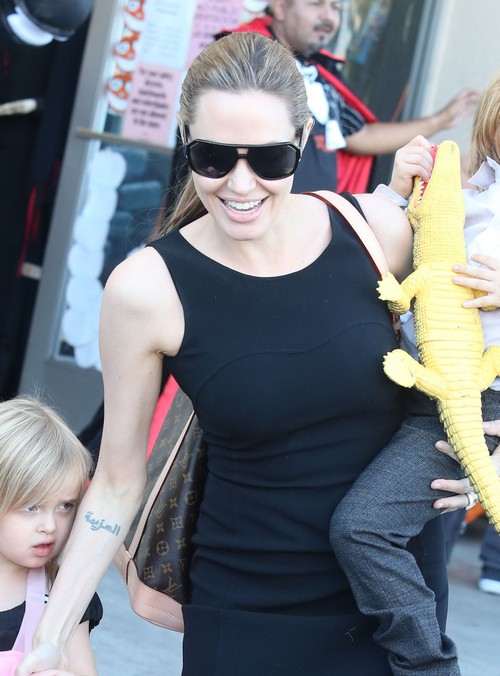 It had to happen eventually and quite frankly, I’m surprised it has taken this long. I’m talking about Angelina Jolie and her raunchy past catching up with her. After stealing a very married Brad Pitt and making him her own, the actress then started to work extra hard at revamping her total image. Angie gave her life a complete overhaul, replacing her various addictions with various adopted children. She also dove in to foreign affairs and has acted a peaceful ambassador for various, underprivileged countries around the globe. That’s all well and good, but here’s the problem. Angie spent the first 25 years of her life as a total wild child.

Angelina Jolie didn’t exactly try to hide her drug use and spoke openly about cutting and self mutilation. Then there was the sexcapades, with anyone and everyone depending upon her mood. Angie has never even tried to deny some of the rumors and more often than not, has shamelessly admitted to her exploits.

Apparently, according to the National Enquirer Brad Pitt is working overtime to keep video proof of Angie’s past under wraps. Supposedly she was filmed back in 1999 on a heroin induced bender that shows the actress getting really dirty. Not just a sex tape, it also shows her self mutilation. Brad has offered to pay millions to keep this thing from ever seeing the light of day. He absolutely needs to protect, not just the good name that Angie has built for herself, but those six impressionable kids that call her mom.

Can you imagine watching your mother drugged out, cutting herself? Talk about traumatizing!  No wonder money is no option for Brad!  Will he manage to keep this tape from seeing the light of day? Tell us your thoughts in the comments below!