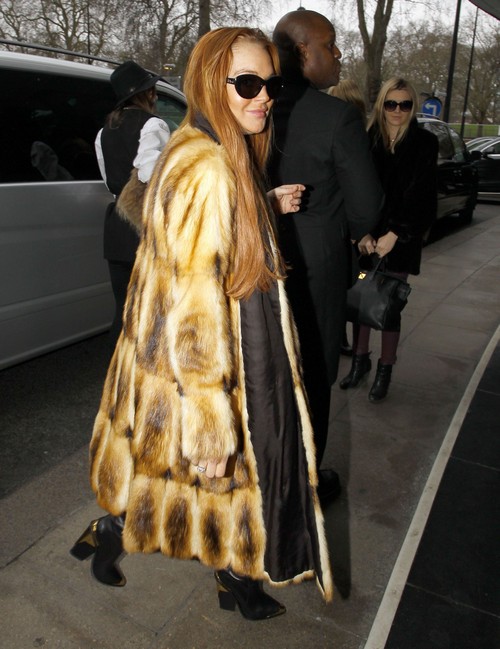 Isn’t it funny how when you hear the name Lindsay Lohan you know that whatever the story is, it’s not going to be about anything great? Or at least nothing that would fall into the realm of good behavior!  Anyway, apparently Lindsay got tired of causing trouble and racking up new criminal charges in this country and so she decided to head to London to raise hell- or at least eyebrows.

She hasn’t skipped across the pond to work because you and I both know that Lindsay doesn’t do much of that.  Instead she arrived at the Dorchester Hotel in London in a showy, full-length fur coat and has decided that the U.K. is the best place to spend a few days leading up to New Year’s Eve. It also just so happens to be where her latest crush, boy-bander, Max George is spending part of the extended holiday!

Leave it to Lindsay to go chasing after a guy that really has precious little interest in her. Max is rumored to like her, but is smart enough to at least try to keep his distance. It sounds like Lindsay is making that a bit tricky with her stalker-esque, continental game of hop scotch just to see The Wanted band member!

Should Max give Lindsay a shot or should he kit the ground running because this chick is nothing but trouble- when she’s not bordering on crazy! Could they make a decent couple, if he just gave her a chance? Can any man ever tame Lindsay and bring her to her senses about changing her lifestyle? Tell us your thoughts in the comments below!