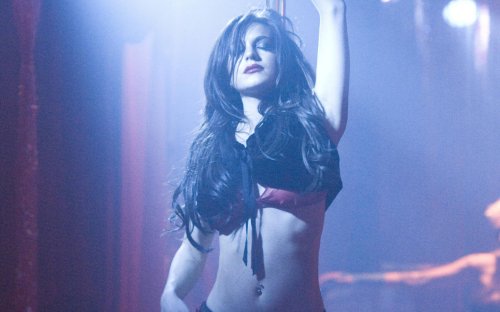 When you’ve screwed up your career as badly as LiLo has, it’s either reality TV or really naked TV. Lindsay has reportedly told friends, “I am not doing celebrity big brother” so perhaps she’s opted for porn. It pays better and will take up less of her time and could potentially be less embarrassing in the long run. Lindsay may not like the idea about being locked up in a house with a bunch of strangers, but if her probation is revoked and she’s tossed in the pokie, that’s what she’ll be doing anyway – but without cameras watching 24/7 and without a paycheck.

If she does decide to give in and take the lucrative pornography offer, Lindsay’s hoping to be able to do something more like Octomom’s self-pleasure video. But with Lindsay’s most recent relationship being with a woman, the obvious choice from my viewpoint is girl on girl action. I think that would find a much wider audience than just Lindsay getting busy with herself. She also would be doing pay-per-view rather than something that would be widely available on DVD – although I’m sure a DVD offer would follow.

I just got a great idea for a new celeb reality show – we can call it House Arrest – and it could feature all the celebs who’ve had their probation revoked locked up in a Bev Hills mansion together. We could put Lindsay in there, OJ Simpson, Katt Williams, Dr. Conrad Murray and all of the other actors, rappers and teen moms that are behind bars. Lock them in, give them a few cocktails and hilarity would ensue. Maybe Dr. Drew could counsel them… I think it’s got potential!